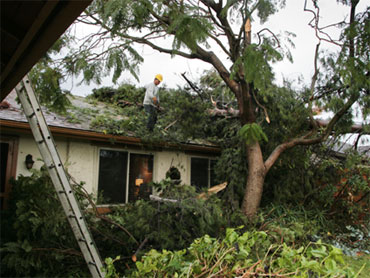 A state of emergency has been declared in five California counties, after a fourth storm pounded the coast.

Storm-battered southern California began to dry out Friday after a wild week of storms that flooded streets, spawned at least a few tornados, and left a trail of damage, but the possibility of huge mudflows was still a concern.

The siege of storms has led to several deaths statewide, flooded urban areas and turned the region's often-dry river and creek channels into raging torrents.

uthorities told thousands of evacuees Friday that they soon would be allowed to return to their foothill homes as Southern California's fourth storm of the week dissipated into occasional thunderstorms.

Los Angeles County sheriff's Chief Neil Tyler said notices of which neighborhoods would be released were being posted Friday on a county Web site starting at midmorning.

Tyler warned, however, that lines of thunderstorms continued to pose threats, so some areas would remain under evacuation orders.

Nearly 2,000 homes had been ordered evacuated during the week, according to county Supervisor Mike Antonovich. That marked an increase from earlier estimates of about 1,200.

No major mudslides or debris flows were reported, but Antonovich said some homes have been damaged.

Snow coated the mountains above the foothill neighborhoods Friday morning.

A week of storms has brought 8 to 10 inches of rain to the Los Angeles-area mountains, while lower-lying areas got about half that, weather service meteorologist Eric Boldt said.

Most Southern California areas will see about a half-inch of rain Friday but areas hit by brief but fierce thunderstorms could get 1 to 2 inches, Boldt said.

According to experts, in conditions like this, a mud slide can start in an instant and travel at speeds of 35 mph. If that happens, Price notes, sandbags and K-rails will offer little protection.

After a week-long pummeling, the roads in these foothills look like raging rivers.

Evacuee Shelby Grey spent thousands of dollars trying to keep the mud out of his home. Now he and his wife are in a nerve-wracking game of wait-and-see.

"The house could be buried and our backyard could be buried, so we're just hoping that something like that doesn't happen," Shelby Grey told CBS News.

The area here recently went through the worst wildfire in a century. Combine that with the biggest rain event in the last 10 years, and what you have is saturated soil and erosion, a very dangerous situation. Experts say it's only a matter of time before these hills come tumbling down.

Hundreds of evacuees forced from homes in foothill communities were expected to learn sometime Friday whether it was safe for them to return home. Officials have said the risk of mudslides can last up to 72 hours after the rains have stopped.

Authorities said an extensive flood-control system was working, but many of the basins designed to catch debris-laden runoff from fire-scarred mountains were full and evacuations remained necessary. They insisted that residents of endangered homes should obey evacuation orders.

"It's not safe to say that we're out of the clear just yet," Gail Farber, the Los Angeles County Public Works director.

Authorities said an extensive flood-control system was working, but many of the basins designed to catch debris-laden runoff from fire-scarred mountains were full as the region entered a fifth straight day of rain.

Soil experts planned to examine the ground in Los Angeles County burn areas to determine whether it was safe to allow evacuees to return. The weather was expected to dry out over the weekend before yet another storm front moved in.

Justin Ross whooped and hollered while he dug his shovel furiously into the 3-foot deep mud that was quickly rising beside his parents' house in the La Canada Flintridge foothills north of downtown Los Angeles.

Ross, 23, stopped only to dip his fingers in the muck and wiped a streak across each cheek, as water the color of chocolate milk poured down the steep slope.

"I put on the war paint and started screaming a sort of war whoop. It was a combination of exhaustion and exhilaration," he said during a break between squalls Thursday afternoon. "I feel like I've been shoveling for four days straight because I have."

A young man was pulled from a rushing river in Orange County on Thursday, but rescuers couldn't confirm his report that a companion got swept away following a fruitless search.

In Pacifica, south of San Francisco, 20 feet of cliffside crumbled under heavy rains, leaving an apartment building on the edge of nowhere.

Neighboring Arizona also was pounded with rain and snow that prompted a search for a boy who was swept away by rising waters, flooded an unknown number of homes in another community and left several hikers stranded.

A search was under way early Friday for the 6-year-old boy who was swept about 70 miles north of Phoenix near the community of Mayer. Dwight D'Evelyn, a spokesman for the Yavapai County Sheriff's Department, said the boy was presumed dead.

In western Arizona, a 2-foot surge of runoff flooded streets and an unknown number of homes early Friday in Wenden, a community of 500 people located about 100 miles west of Phoenix. No one was reported missing or injured.

Travel snarls mounted Thursday as major highways were closed by snow and tornado damage, and strong winds grounded flights at several airports. Another tornado left a trail of damage in a community northwest of Los Angeles.

A motorist was rescued after a tornado knocked power lines onto a highway in the state's remote southeast corner, trapping the man inside his vehicle.

By late afternoon the storm had added as much as 3.2 inches of rain to the 5 to 6 inches that fell earlier in the week across the mountains of Los Angeles County. Unstable conditions after the storm brought hail, thunder and lightning throughout the night.

The basins are located on streams and other water courses emerging from the mountains to intercept surges of mud, boulders and other debris while allowing water to flow into open channels and underground storm drains that empty into the ocean.

The major area of concern has been foothill communities along the perimeter of the San Gabriel Mountains, where a summer wildfire scorched 250 square miles and burned right up to the backyards of homes that abut the steep slopes.

Since the beginning of the week, officials ordered more than 1,200 homes evacuated.

By nightfall, the storm's main rainfall was passing but forecasts warned of volatile conditions through the night. Los Angeles Mayor Antonio Villaraigosa said the city's evacuation orders remained in effect.

"While the worst of the last few storms is behind us, there still is a significant threat from thundershowers that are forming off the coast and have the potential to bring lightning, hail, waterspouts and small tornados," he said.