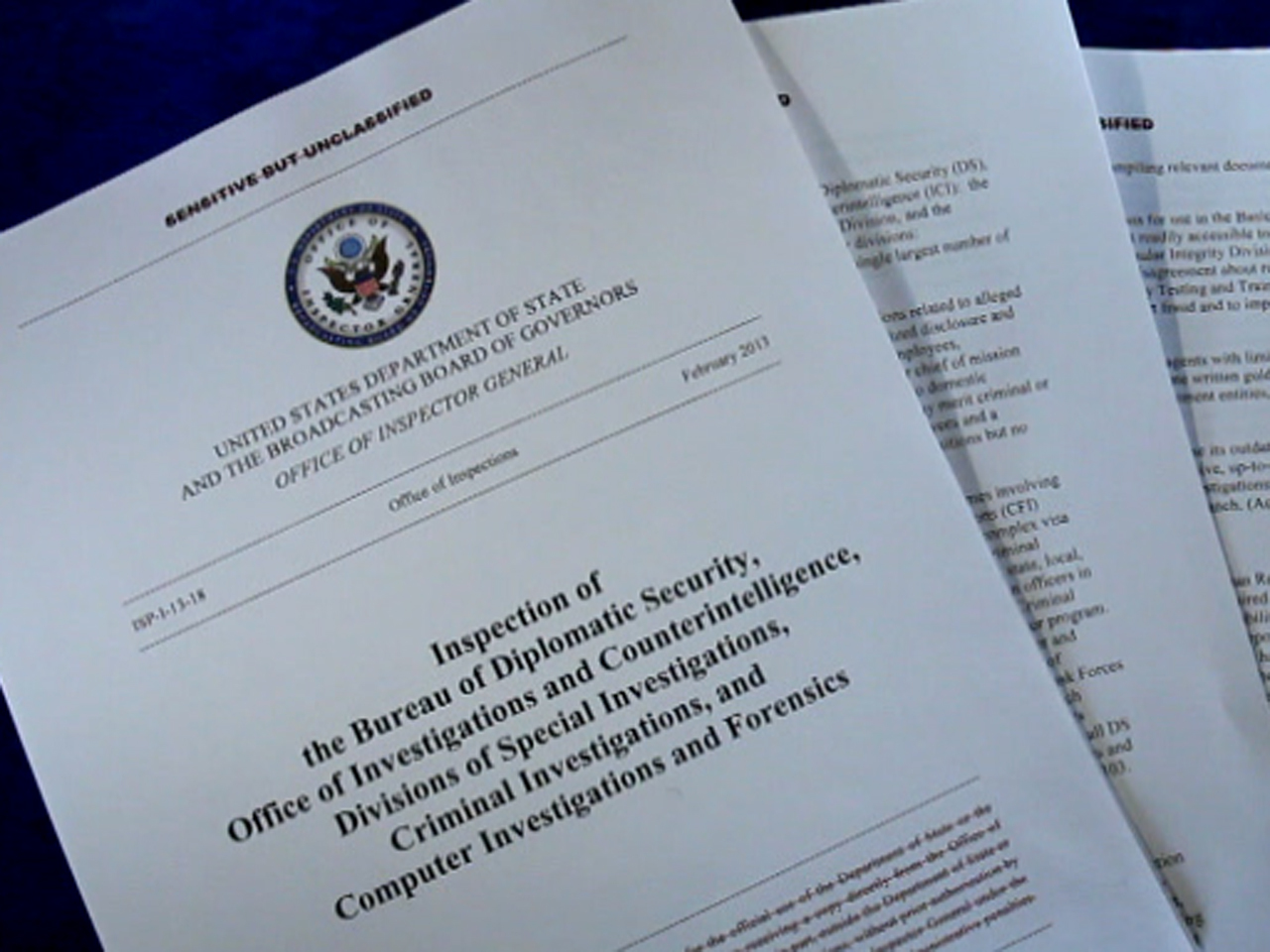 Updated at 2:59 p.m. with comment from the State Department.

(CBS News) CBS News has uncovered documents that show the State Department may have covered up allegations of illegal and inappropriate behavior within their ranks.

CBS News' John Miller reports that according to an internal State Department Inspector General's memo, several recent investigations were influenced, manipulated, or simply called off. The memo obtained by CBS News cited eight specific examples. Among them: allegations that a State Department security official in Beirut "engaged in sexual assaults" on foreign nationals hired as embassy guards and the charge and that members of former Secretary of State Hillary Clinton's security detail "engaged prostitutes while on official trips in foreign countries" -- a problem the report says was "endemic."

Aurelia Fedenisn, a former investigator with the State Department's internal watchdog agency, the Inspector General, told Miller, "We also uncovered several allegations of criminal wrongdoing in cases, some of which never became cases."

In such cases, DSS agents told the Inspector General's investigators that senior State Department officials told them to back off, a charge that Fedenisn says is "very" upsetting.

"We were very upset. We expect to see influence, but the degree to which that influence existed and how high up it went, was very disturbing," she said.

In one specific and striking cover-up, State Department agents told the Inspector General they were told to stop investigating the case of a U.S. Ambassador who held a sensitive diplomatic post and was suspected of patronizing prostitutes in a public park.

The State Department Inspector General's memo refers to the 2011 investigation into an ambassador who "routinely ditched ... his protective security detai" and inspectors suspect this was in order to "solicit sexual favors from prostitutes."

Fedenisn says "hostile intelligence services" allow such behavior to continue. "I would be very surprised if some of those entities were not aware of the activities," she said. "So yes, it presents a serious risk to the United States government."

A draft of the Inspector General's report on the performance of the DSS, obtained by CBS News, states, "Hindering such cases calls into question the integrity of the investigative process, can result in counterintelligence vulnerabilities and can allow criminal behavior to continue."

John Miller spoke with Mike Pohelitz, a retired Senior Agent at the DSS who was involved in one of the cases listed in the Inspector General's memo. Pohelitz said he was told to stop investigating one of the cases and that the order likely came from the upper ranks of the DSS.

"I got the information through my DS channel," he told Miller. "But it had to come from somebody higher than DS, I'm sure."

According to Fedenisn, when a high-ranking State Department security officials was shown a draft of their findings that investigations were being interfered with by State Department higher-ups, he said, "This is going to kill us." In the final report however, all references to specific cases had been removed.

"I mean my heart really went out to the agents in that office, because they really want to do the right thing, they want to investigate the cases fully, correctly, accurately ... and they can't," Fedenisn said.

Fedenisn, a DSS agent for 26 years, was a part of the team that prepared the draft report and is now a whistleblower who has taken her concerns to Congress.

Speaking at a press briefing Monday, State Department spokesperson Jen Psaki said: "We hold all employees to the highest standards. We take allegations of misconduct seriously and we investigate thoroughly. All cases mentioned in the CBS report were thoroughly investigated or under investigation, and the -- the department continues to take action. Finally, the department has responded to the recommendations in the OIG report regarding the Bureau of Diplomatic Security's of Investigations and counter-intelligence. Diplomatic Security has taken the further step of requesting additional review by outside experience law enforcement officers on top of the OIG inspection so that officers with law enforcement experience can make expert assessments about our current procedures."

Psaki went on to say the "notion that we would not vigorously pursue criminal misconduct in a case, any case, is preposterous ... ambassadors would be no exception." Without speaking about specific cases, Psaki described any misconduct as "hardly endemic."

A statement provided to CBS News by the Inspector General's office said:

On its own initiative, OIG Office of Investigations has been conducting its own independent review of the allegations made. This is our standard procedure.

We staffed it independently and appropriately and they were people hired specific for this review at the end of 2012. They are on staff. We staffed it with the best people we can find at hand to do the job.

DS does not speak for us.