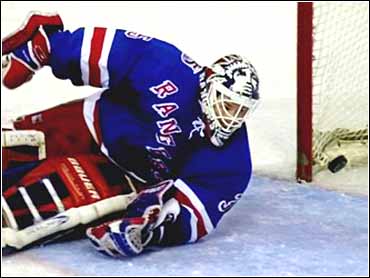 Joe Nieuwendyk scored three goals, his Dallas Stars added three others, and they could have had a whole lot more.

The Stars dominated play even without four regulars, including leading-scorer Brett Hull, missing with a ribcage injury. Dallas held a 30-15 shots advantage and also got goals from Mike Keane, Blake Sloan and Brenden Morrow.

"That team has got a lot of talent," Nieuwendyk said of the Rangers. "They've been under the gun lately. It's impressive when you can limit them to 15 shots."

Rangers coach Ron Low shuffled lines in an effort to spark his reeling team, but the changes had little effect as New York fell to 1-8-1 in the last 10.

"That wasn't a good effort by our hockey club," Low said. "A lot of our guys looked disinterested."

The Rangers are winless in nine road games (0-8-1), their worst stretch since the 1984-85 season. The team played most of the game on the perimeter, refusing to mix it up with the more physical Stars.

"I think our effort obviously wasn't enough," Rangers captain Mark Messier said. "I don't think anybody can feel happy about this game. I have no comment on our physical play. I don't care to vent my views publicly."

Mike Modano and Brad Lukowich had two assists each for the Stars, 4-1 in their last five games.

"We're getting good performances from our leaders, but we're also getting significant contributions from our third and fourth lines," Stars coach Ken Hitchcock said. "That's how you build a team."

Brian Leetch scored his 11th goal of the season at 11:20 of the first period on a power play for the Rangers. It was New York's first power-play goal in the last 22 chances.

Nieuwendyk scored from the slot at 15:28 to give Dallas a 3-1 lead after one period. His power-play goal at 11:20 of the second got through Rangers goalie Mike Richter to extend Dallas' advantage to 4-1.

Morrow's goal with 9:21 left gave the Stars a 5-1 lead, and Nieuwendyk scored with 1.4 seconds left for his 13th career hat trick.

Asked if his team quit, Low said, "I hope not."

Nieuwendyk has 17 goals, two more than he scored during an injury-plagued 1999-2000 season.

"We've got an attitude that we think we can win every night," Nieuwendyk said. "We've got quality guys on this team who've been through a lot of wars."

Dallas placed forward Kirk Muller on injured reserve on Sunday because of a chest contusion. Defenseman Darryl Sydor was scratched from Dallas' lineup because of the flu.

Returning from injuries for the Stars were defenseman Gerald Diduck and right wing Grant Marshall.