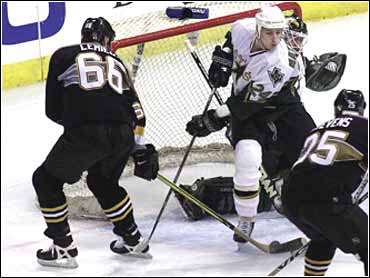 This was the kind of wide-open, back-and-forth scoring spree Brett Hull and Mario Lemieux love.

Goals 34 seconds apart. Three tying goals in the third period, with the last one coming 1:06 after a go-ahead goal. Then, after 10 even-strength goals, a 4-on-3 winner in overtime.

Dallas' Darryl Sydor got it on a shot that ricocheted into the net off defenseman Hans Jonsson 42 seconds into the extra period, giving the defensive-oriented Stars a 6-5 victory over the Pittsburgh Penguins on Friday night.

"That's not how we're supposed to play, but I don't mind it," said Hull, whose third-period goal broke a tie with Detroit's Steve Yzerman for seventh on the career list. "I would pay top dollar to watch that every night."

Fans who paid to see Lemieux weren't disappointed as he scored midway through the first period, giving Pittsburgh a 2-0 lead. It was his 10th in 11 games and the 623rd of his career, ranking No. 9 on the career list.

But the Stars scored three times in the second, including goals 34 seconds apart by Grant Marshall and Ted Donato, and never trailed again.

Dallas moved into a first-place tie with San Jose in the Pacific Division.

Pittsburgh has lost two straight for the first time since Lemieux moved from the owner's box to center. The Penguins have won only one of their last five and are 6-5 with Lemieux.

This was the second straight ame that Pittsburgh was let down by its penalty-killing unit. The Penguins gave up four straight power-play goals in a 5-4 loss to Phoenix on Wednesday.

"We had a few breakdowns where we went to the wrong guy on odd-man rushes," Lemieux said. "We've got to be more careful."

One of the last games Pittsburgh played before Lemieux decided to return was an 8-2 loss to Dallas on Dec. 23. The Penguins looked so bad that it probably helped convince him how much the team needed him.

"I'm not where I want to be, but I'm working hard to get there," Lemieux said. "My speed and change of direction has got to get better."

Jaromir Jagr, who came in tied for the NHL lead in goals at 26, tied it at 3 just 26 seconds into the third period. Dallas answered a few minutes later when Hull scored off Mike Modano's pass following a faceoff.

But 14 seconds into overtime, Kovalev was caught hooking Modano. Given a 4-on-3 edge, the Stars cashed in quickly when Sydor sent what looked like a pass to Joe Nieuwendyk into the crease and wound up with his fourth goal of the year and first game-winner.

"Coming up with a win is big for us," Sydor said. "We don't want to give up five goals, but on the other end of the ruler we now know we can score, too."

The Stars are unbeaten in their last eight games against Pittsburgh. The Penguins have won only once in Dallas since the franchise moved from Minnesota.

Penguins goalie Garth Snow, who sat out the last four games after giving up nine goals in two starts, had 28 saves.

Pittsburgh's Darius Kasparaitis left the ice with blood spurting from his face after skating into a flying puck with 1:02 remaining in regulation. He needed more than 10 stitches to close a cut over his left eye.
"I was trying to pick up the puck and I got hit in the face," he said. "I was scared at first, but then I saw it was above the eye."