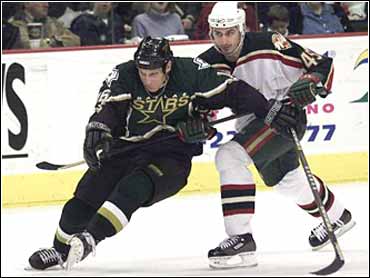 Nothing went right for the Dallas Stars in their first trip back to their old home.

Manny Fernandez made 24 saves to shut out his former team and Darby Hendrickson scored twice as the expansion Minnesota Wild beat Dallas 6-0 Sunday for their most lopsided victory.

A record crowd of 18,834 watched the Stars return to the state where they played until the franchise moved in 1993.

"Before this game, the fans were very excited," Minnesota coach Jacques Lemaire said, comparing the atmosphere to that of a playoff game. "We could feel it in the locker room. And the fact that we scored got them excited, too. We could sense how much the fans wanted us to win this one."

It was Fernandez's second shutout this season, and the first time the Stars had been blanked since a 1-0 loss at Carolina on Nov. 20, 1999.

Fernandez was with Dallas last season as Ed Belfour's backup.

"Manny made some big second and third saves, but it was an easy night," said Dallas coach Ken Hitchcock. "This game was over in the first period."

The Wild scored twice in less than a minute in the opening period. Jeff Nielsen made it 1-0 with a slap shot from the top of the left faceoff circle. On the next shift, Ladislav Benysek's low shot from along the boards hit the stick of Wild forward Marian Gaborik and deflected into the upper right corner of the net with 10 minutes gone.

Dallas failed to convert four power plays in the second period, and trailed 4-0 after 40 minutes of play.

Fernandez said his knowledge of the Stars' tendencies helped once the game started.

"I practiced the power play a lot wheI was in Dallas, so there was stuff from that I remembered that really helped tonight," said Fernandez, who didn't speak with any former teammates before or after the game. "I decided that today was going to be war time. This wasn't a time for friends."

Minnesota's Peter Bartos scored 11:42 into the second period, intercepting Brett Hull's clearing attempt and firing it into the upper left corner of the goal.

Two minutes later, Belfour attempted to clear the puck himself, but it was picked off by Minnesota's Antti Laaksonen behind the net. With Belfour out of position, Laaksonen passed to Hendrickson, who tapped the puck into an empty net.

"They scored all the goals the way we score goals traffic at the net, deflections and hard-working opportunities," said Hitchcock. "We got beat in every checking area."

Despite all the scoring, Minnesota continued to struggle on the power play. The Wild went 0-for-6 Sunday in man-advantage situations and have failed to score on 38 consecutive power plays, dating to a 4-1 loss at San Jose on Nov. 28.