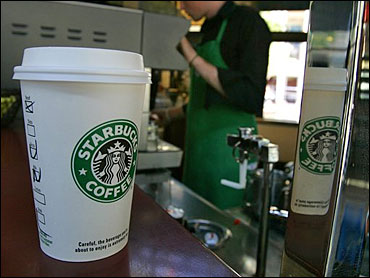 What does a Frappuccino and a film have in common? As correspondent Vince Gonzales reports, coffee giant Starbucks just joined forces with a major Hollywood talent agency to find movies to promote in their stores.

Starbucks hired the William Morris Agency to help it cut deals to market books, films and more music to customers.

With about 11,000 stores in 37 countries, Starbucks says it serves 40 million customers a week. That's a lot of coffee drinkers picking up some music or a movie with their morning mocha.

The first film to get the Starbucks treatment is "Akeelah and the Bee," a heart-warming film that wasn't expected to attract much attention until the coffee tie-in began.

"It was such an inspirational film, just a great story, the sense of community that this film was all about, which is so close to what Starbucks is all about," says Ken Lombard, the president of Starbucks Entertainment.

Despite heavy promotion inside Starbucks, opening box office numbers were low. Does Starbucks have the clout to get those coffee drinking customers into movie seats?

"They think they do. I happen to think it's going to be a tough sell," says Ronald Grover, L.A. Bureau Chief of BusinessWeek. "I think they do very well at selling you the coffee. Getting people to then leave, go somewhere else and into a movie theater to buy tickets, that's a whole different thing."

For Starbucks customers such as Peter Hontley and Deborah Tarica, it's still mainly about the coffee.

"Normally, I'm just going to get coffee but if there's something that holds my interest, I might decide to buy it, I'll totally get it," Hontley tells Gonzales.

"It might help a little bit. I mean I didn't know anything about 'Akeelah and the Bee.' I think I'm a little more intrigued now," Tarica adds.

That "extra" little bit of interest helps but it's going to take a really special film to spell success for Starbucks.