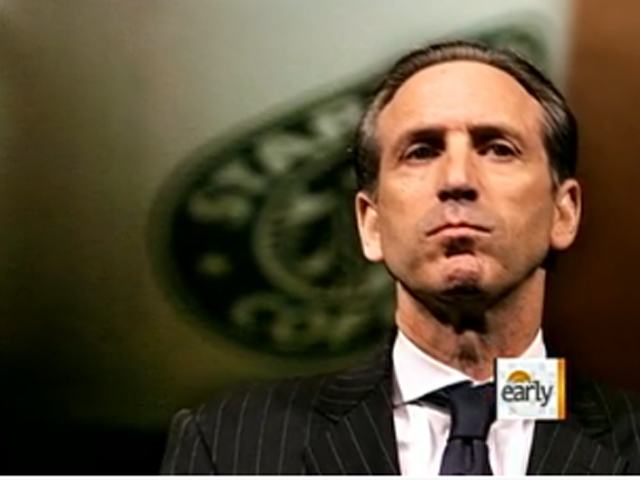 Howard Schultz has spent 40 years building Starbucks into a coffee empire. But lately, he's been focusing on the gridlock in Washington. Simply put, he wants people to stop making political donations until elected officials get their act together.

But would Schultz himself consider entering the Washington fray?

On "The Early Show" Wednesday, Schultz said, "I'm not here to run for office. I run a coffee company, but I do care so much about the country and I'm so concerned about where we're headed."

Schultz says this summer's bitter debate over raising the debt ceiling was the final straw. In a town-hall style webcast, he called on Americans to demand that lawmakers end their partisan bickering and find solutions to the nation's mounting problems.

Schultz said on the call, "We, as Americans, have to send a message to Washington that you work, respectfully, for us."

Schultz urged Washington politicians to reduce the corporate income tax for companies that create jobs and focus on policy without regard to reelection.

"The people who are in power in Washington literally forget why they're there," he said. "What I would say to them is, 'Try to put your feet in the shoes of Americans who are unemployed, can't make their mortgage payment, lost their house, etc."

Tuesday's webcast was just part of the chief executive officer's bold campaign. He's taken out newspaper ads -- an open-letter in which he tells elected officials to "put citizenship ahead of partisanship."

Schultz's crusade against Washington gridlock began last month, when he challenged other CEOs to withhold campaign contributions until the political wrangling stopped. So far, more than 100 company CEOs have signed on.

On "The Early Show," Schultz said that, during his teleconference, the prevailing opinion among the people who attended was a fracturing in the level of trust and confidence in the government.

"The American dream, which has been such a big part of the DNA of America, seems to have been fractured and people feel like they've been left behind," Schultz said.

He added, "...This is a time where the president and Congress need to come together and recognize that nine percent unemployment, a fracturing of trust and confidence, is just not the way that we can keep America going. There has to be a change."

Co-anchor Hill asked, "You're calling on politicians to do the job they were elected to do, to put aside the ideology, the partisanship. Have you heard back from anyone in Washington who has said to you, 'Yes, I can do that, yes, we can make this happen?"'

Schultz said, "I have heard from some elected officials from both sides of the aisle. They say the same thing, but get back into their job and, what happens is, they're concerned about their own ideology, reelection, and what I'm saying to them is, 'This is a time where America needs to be represented, not a singular focus on one constituent."'

He continued, "More than ever before, the people in the country needs to recognize, this is no longer a crisis, this is an emergency, and we need to get people in America to realize they have a voice, that Washington works for us. Let them know how concerned we are, and let them know that we are not going to embrace the status quo. We need leadership. We need a level of civility and respect, and Congress and the administration need to give us a long-term debt ceiling deal that satisfies the crisis confidence in America with a laser focus, a sense of urgency like no other time in our history, to reduce unemployment and get the economy growing again."

For Schultz's complete "Early Show" interview, including his thoughts on what the U.S. needs to do to get the economy moving again, click on the video above.

Former President Obama is appearing at a drive-in rally in Philadelphia on Wednesday evening.