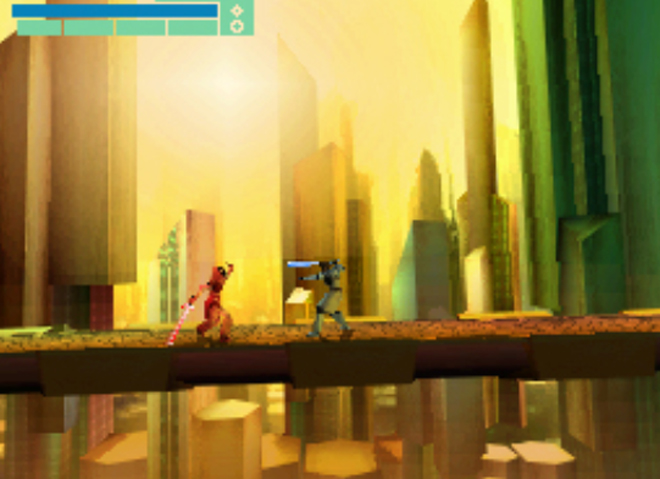 No, I'm not being paid to only review Star Wars games! I just happen to have all the cool toys available to play the games with. So, since I have a Nintendo DS, (and I'm not playing the *absolutely awesome* "The World Ends with You" from Square-Enix right now,) I was tasked to check out LucasArts' latest; "Star Wars: The Clone Wars - Jedi Alliance" on the Nintendo DS handheld console. Sure, it's available for other consoles as well (check out our Kent Lee's excellent Nintendo Wii review of "Jedi Alliance"!) but I'm down to get my mobile Jedi on!

"Star Wars: The Clone Wars - Jedi Alliance" is set during the same time period as the computer graphically (CG) animated show that is currently showing on Cartoon Network. So the Jedi (the good guys) are still in command of the massive clone army and the Sith (the bad guys) are slowly expanding their reach and influence across the galaxy, converting or conquering all in their way in order to control the galaxy. The Jedi are constantly dispatched to investigate issues that are Sith related, which usually mean trouble for them and the galactic peace they are trying to protect.

After choosing 2 of the 6 available Jedi to take on your mission, one notices that the Nintendo DS version is almost fully stylus based, controlling everything from basic movement to combat, quick time events and mini-games. To move your tag team duo around the environment, simply hold or drag the stylus to where you want them to walk. To jump, simply tap on the destination. Swinging the lightsaber to break objects is as simple as tapping on the object several times until it breaks. Combat is more advanced as each foe that is engaged has 3 zones to attack, high, middle and low, which makes combat interesting as tapping a different zone will not only bypass the enemy's defense but also opens up different combinations of attacks that can be stringed together. The combat mechanic is done pretty well and helps to keep the fighting engaging and fun. Being able to use a force power and having the ability to team up on a single enemy with your computer controlled partner are a nice features as well.

But even with this, the pacing of the game is generally slower than I expect a Star Wars game to be. I did a lot of walking around large environments and breaking of objects to collect items, which made me hope that the next scene would have more enemy robots to turn into scrap metal! The quick time events break up the monotony pretty well, and if more of the game were based on these, then this would feel more like a proper Jedi game. Unfortunately, they are too few and far between for me and makes the rest of the game seem all the more slow for it.

Lets face it, if you and your partner are in an exploding starship engine room, reactors blowing up around you, catwalks crumbling, fires racing at your feet, while you are doing quick stylus sweeps across your screen to keep your Jedi alive though masterful lightsaber attacks and acrobatics Olympic gymnasts can only dream of, walking from the engine room back to the control bridge, one plodding screen at a time, seems kind of dull.

The game looks as good as the DS will allow, the control scheme is solid, the combat is enjoyable and the sounds, as necessary for *any* Star Wars game, help transport you to a galaxy...yeah, you know. But it's a kind of slow game with moments of good combat sequences. So game is not bad, but you definitely want to know what experience this game will offer you before you purchase it.

Basically, if you are a fan of the CG animated Clone Wars series, are looking for a relatively easy Star Wars game for your Nintendo DS, or if you have younger children who are into the Star Wars mythos, but you are apprehensive about purchasing the rated "T" for Teen "Star Wars: The Force Unleashed" because of the teen level violence, then "Star Wars: Clone Wars - Jedi Alliance", rated "E10+" for Everyone ages 10 and up, for the Nintendo DS is just what you are looking for. If you are looking for a game with a bit more challenge or speed, you might want to consider "The Force Unleashed" before this one.