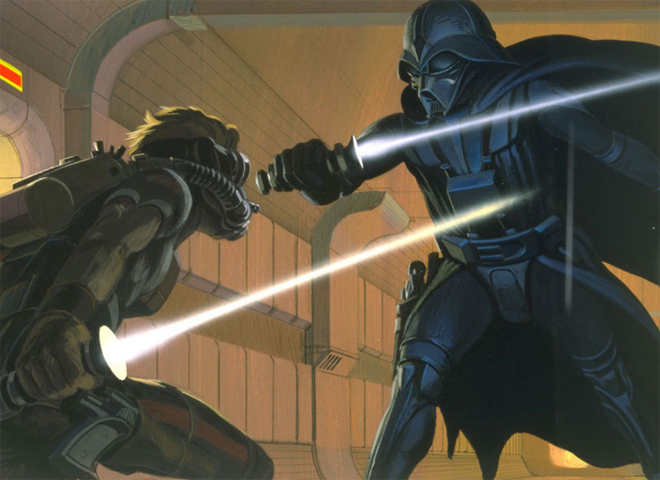 (CBS News) Ralph McQuarrie, the artist whose conceptual paintings were instrumental in designing the landmark "Star Wars" films, has died at age 82.

The announcement was made on his official website, ralphmcquarrie.com.

The success of his "Star Wars" paintings launched a late feature film career for McQuarrie that included helping design such classics as "Raiders of the Lost Ark," "E.T.: The Extra-terrestrial," "Back to the Future," "Cocoon," "Total Recall," and the original TV series "Battlestar Galactica."

"I am deeply saddened by the passing of such a visionary artist and such a humble man," George Lucas said in a statement. "Ralph McQuarrie was the first person I hired to help me envision Star Wars. His genial contribution, in the form of unequaled production paintings, propelled and inspired all of the cast and crew of the original 'Star Wars' trilogy. When words could not convey my ideas, I could always point to one of Ralph's fabulous illustrations and say, 'Do it like this.'"

"In many ways, he was a generous father to a conceptual art revolution that was born of his artwork, and which seized the imaginations of thousands and propelled them into the film industry. In that way, we will all be benefiting from his oeuvre for generations to come," Lucas said.

"Beyond that, I will always remember him as a kind and patient, and wonderfully talented, friend and collaborator."

Following his work on Apollo TV newscasts, McQuarrie came into contact with Hal Barwood and Matthew Robbins, who had worked with Lucas on that director's first feature film, "THX-1138," about designing a science fiction film. That project never materialized, but through their work Lucas met with McQuarrie and asked him to design what ultimately became "Star Wars."

Even after the success of "American Graffiti," Lucas could not find a buyer for his script for "Star Wars" - science fiction at that time being thought box office poison.

"George felt that it was the kind of script that people weren't very impressed with," McQuarrie told Cinefantastique magazine in 1978. "The idea seemed kind of funky. He envisioned the picture as a real visual experience, much more so than a story. It wasn't true science fiction. George called it a science fantasy, and even the fantasy aspect was non-traditional."

Lucas provided McQuarrie with comic book illustrations and other source material, but McQuarrie contribution was to make the alien worlds, species, spaceships and costumes tactile.

He created the look of robots and light sabers, (C-3PO was inspired in part by the robot of "Metropolis"), stormtroopers and Darth Vader, the Death Star and TIE-Fighter dogfights, and other crucial elements.

"I wanted to make these paintings as close to what would be on the screen as possible," McQuarrie told Cinefantastique. "That was a product of, or a result of our wish to make the people at Fox feel that we had a picture that was going to have a quality image, one that wasn't going to be trashy science fiction . . . It was going to be a real polished product."

McQuarrie's nearly two-dozen illustrations proved crucial in getting the backing of 20th Century Fox to go into production, though there were variations from the final product given the early pre-production stage - the fact, for example, that Luke Skywalker is depicted as a girl.

"Fox thought there should be some romantic interest - I think this is why George made Luke a girl," McQuarrie recalled. "Then Han Solo would be the robust hero and we could have a little tension between the two characters. That was okay, but at some point George decided to make Luke a boy again and bring in the Princess as a third character."