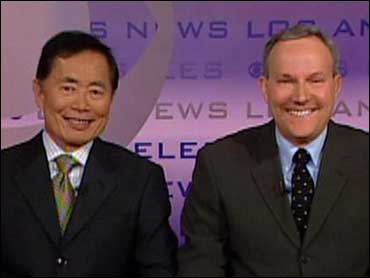 Star Trek's Mister Sulu has agreed to live long and prosper -- with his long time partner.

"I thought that I would never have marriage in my life," Takei said.

But first -- the frustration of wedding planning.

That is a sore point you are bringing up. I will talk about marital problems, pre-nups, anything, but don't ask me about planning the wedding," Altman said. "That's sensitive. We didn't get a wedding planner."

Altman planned just about all of it, from the cake, to the fittings, the decorations, the rehearsal. And yesterday, with two of Takei's Star Trek co-stars -- Nichelle Nichols and Walter Koenig -- by their sides, Takei and Altman exchanged vows and rings -- spouses for life.

Their relationship has been tested. When Takei's mother grew ill with Alzheimers, work kept Takei so busy, Altman became her primary caregiver the last years of her life.

"I mean that was a test of his love and I'm eternally grateful and my love for him is that much deeper," Takei said.

"We are family," Altman added.

Their legal marriage became possible this year when the California Supreme Court overturned the state ban on gay marriage.

"When the news came down." Takei said. "I happened to have a mouthful of sandwich - it was lunchtime - and suddenly Brad dropped on his knees and he said … "

"George, will you marry me?" Altman said. "And you said?"

But their marriage knot could be undone by a ballot initiative to once again ban same-sex marriage.

On November 4 California voters are going to decide whether our marriage remains legal or is null and void," Altman said. "All of a sudden that's scary to me."

As a child during World War II, Takei and his family were forcibly removed to interment camps with tens-of-thousands of other Japanese Americans. He held his wedding at Los Angeles' Japanese American National Museum to make a point.

"We as gay Americans, we've been stereotyped and characterized as something frightening and threatening as Japanese Americans were before the war," Takei said.

The nullification of their marriage -- an unimaginable future. Their fervent wish ...

The couple will be on The Early Show tomorrow morning in an exclusive live interview and we will bring some video from their wedding.