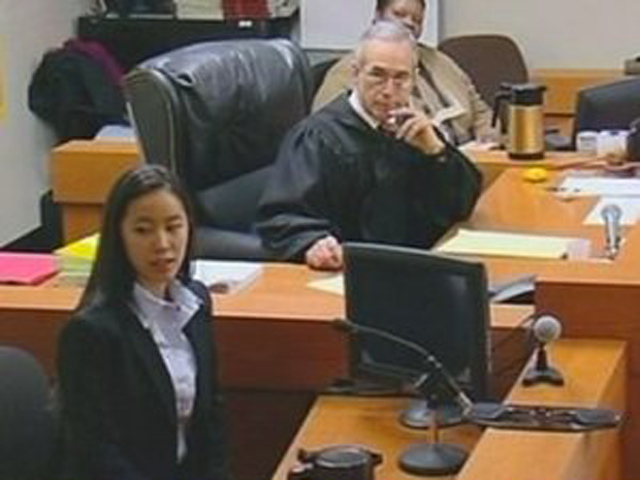 (CBS) NEW BRUNSWICK, N.J. - Former Rutgers' student Molly Wei testified Monday that she and Dharun Ravi, on trial for charges following the suicide of his roommate, watched live video of 18-year-old Tyler Clementi and another man kissing in the dorm room Clementi shared with Ravi.

CBS New York reports this star prosecution witness is due back on the stand Tuesday in the webcam spying trial.

Wei said she and Ravi were able to watch the images from her room using a webcam that had been set up on Ravi's computer.

"First of all, it was shocking. It felt wrong. We didn't expect to see that. And now that we did, it was like we shouldn't have seen it," Wei said. "We didn't want people to know what had happened."

She testified that within minutes, she and Ravi were chatting with friends online about seeing the two men kissing and within an hour, she had agreed to show a few seconds of the streaming video to four others who came into her dorm room.

Both times, Wei said she only saw a few seconds of the stream.

"It was the exact same image except that they had taken their tops off," she said, describing the second time she viewed the video with other students in the room. "As soon as they saw it, I turned it off."

Prosecutors say the freshman suspected he was being watched and reported it to the university and that's when Wei said she was questioned by campus police. But while she was talking to authorities, Wei said Ravi was text messaging her.

During Wei's cross-examination, she said there was never a plan to intimate or humiliate Clementi.

Wei was also initially charged in the case but accepted a deal last year to avoid jail time and potentially a criminal record. She had to enter a pre-trial intervention program and agree to cooperate in the case against Ravi, among other conditions.

A student resident assistant, whom Clementi told about the alleged spying, is also expected to take the stand Tuesday.