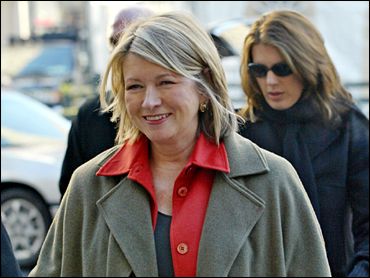 The decision by U.S. District Judge Miriam Goldman Cedarbaum was a boost for prosecutors because Douglas Faneuil's testimony — which had been postponed last week — is the most critical piece of their case.

The judge did not elaborate on the ruling.

A former assistant to Stewart's broker, Faneuil is expected to tell the jury that his boss and Stewart sold Stewart's shares in Imclone Systems after an illegal tip.

The government says Stewart sold the shares because her stockbroker and co-defendant, Peter Bacanovic, sent a tip through Faneuil that ImClone Systems founder Sam Waksal was trying to dump his family's shares.

Forced to shuffle their witness list with Faneuil's testimony in doubt, prosecutors put a former ImClone secretary on the stand Monday who testified that Stewart was "very hurried and harsh and direct" in a call to ImClone Systems headquarters on the day she dumped her stock in the company.

Emily Perret, secretary to ImClone chief Sam Waksal, said Stewart asked her what was going on with ImClone stock. Perret said she answered that she did not know and would leave a message for Waksal to call Stewart back.

The call took place on Dec. 27, 2001. The government says it happened just after Stewart sold 3,928 shares of ImClone.

Perret said on cross-examination that Stewart's tone that day was no different from her tone on other days when she called.

The government also put into evidence Perret's log of Stewart's call that day: "Martha Stewart something is going on with ImClone and she wants to know what."

The delay in Faneuil's testimony came after doubts were raised about what his former lawyer recalled about the circumstances of the stock sale that triggered the case against Stewart.

The lawyer, Jeremiah Gutman, gave a statement to the FBI in 2003 that raised questions about whether it was Bacanovic or Waksal who had ordered Faneuil to tip off Stewart.

In court Thursday, defense attorneys suggested Faneuil had told his lawyer he was not sure whether it was Bacanovic or Waksal. The government suggested it was Gutman - who is in his 80s - who had the memory problem.

It was not immediately clear why prosecutors turned over Gutman's FBI statement late Wednesday night. Lawyers for Stewart and Bacanovic said it should have been provided to them long ago.

"I do think the government should have turned over this information sooner," Cedarbaum said.

Faneuil had been scheduled to testify Thursday, but Cedarbaum postponed the testimony. When prosecutors could not arrange for another witness to come in ahead of schedule in Faneuil's place, she called the trial off for the week. It had already skipped a day Wednesday because of a snowstorm.

Defense attorneys wanted at least a week to investigate Gutman's statement to the FBI in 2003, as well as Gutman's discussions with Faneuil in January 2002.

Gutman himself, who no longer serves as Faneuil's lawyer, has declined to be interviewed by defense attorneys.

The government claims it did not violate any trial rules, and that it was sufficient just to tell the defense that Gutman was part of their case — not what he specifically recalled.

"For Mr. Morvillo to claim there's a Brady violation here is disingenuous," prosecutor Karen Patton Seymour said, referring to a trial rule that requires prosecutors to share some information about witnesses with the defense.

Bacanovic lawyer Richard Strassberg first asked the judge to throw out the indictment against his client, then asked her to declare a mistrial. The judge denied both requests.

Also Thursday, Cedarbaum said she would consider a request from Stewart's attorneys to question Faneuil "about drug use," but asked the defense to produce documents backing up its request. The judge did not elaborate.

Just after Stewart sold the stock on Dec. 27, 2001, a negative government report about an ImClone cancer drug sent the stock tumbling. Waksal later admitted he had advance knowledge of the report.

Stewart and Bacanovic are accused of cooking up a false story about why Stewart sold the stock that day. They claim they had a pre-existing agreement to sell ImClone when it fell to $60 per share.