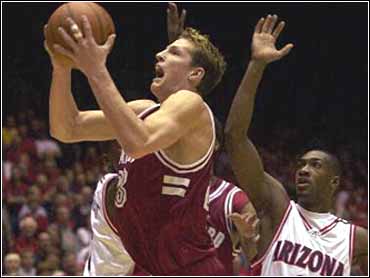 Stanford finally won one on Lute Olson Court, and Arizona's coach wasn't there to watch a painful season get worse for his team.

The No. 2 Cardinal's balance was on full display in beating the 16th-ranked Wildcats 85-76 Saturday for only their third victory at McKale Center in 27 tries and their first since 1996.

"For the seniors, this meant a lot," Mendez said. "We've never won here before. And just the way the Collins twins dominated inside was huge."

Arizona (8-5, 1-1), ranked No. 1 in the preseason, was already struggling and now has had to deal with the loss of Bobbi Olson, the coach's wife of 47 years who died of cancer on Monday.

Lute Olson, who had the court named after him a year ago, has missed three games in a row and his return date is not known.

"It was odd to look down the bench without seeing that imposing figure with gray hair down there," Stanford coach Mike Montgomery said of his counterpart. "It was very strange."

A memorial service for Bobbi Olson is planned for McKale Center on Monday. She had been like a second mother to the current Arizona players and those before them.

"Buto come in here and win and be in charge and not get backed off is pretty special. This is a real hard place to do that."

Loren Woods scored 16 for the Wildcats, who never led after the game's first nine minutes. Michael Wright scored 14 and sat out the last 8:17 of the first half in foul trouble. Gilbert Arenas scored 13, Jason Gardner 12.

Stanford had lost five of six to Arizona, including both games last season.

The Collins twins dominated Woods and Wright inside as Stanford outrebounded Arizona 42-32. Jason had 12 rebounds, six on offense. Jarron had nine.

"The Collins twins made the difference," Montgomery said.

The Wildcats trailed by 10 at the half and were down by as many as 17 in the second.

Arizona rallied to cut it to seven, but could get no closer.

"I thought we were impatient offensively," Arizona associate head coach Jim Rosborough said. "I think we had the ball on the floor too much. We have to wait for openings. ... This was a big game. This would have been a good one to get for coach Olson and Bobbi."

Mendez, who scored 14 in the first half, sank two free throws after a technical foul was called on Gardner to cap an 8-0 run and give Stanford a 60-43 lead with 13:43 to play.

The Wildcats forced three consecutive turnovers during a 7-0 spurt that cut it to 60-50 when Gardner made one of two free throws with 11:13 to go. Woods had an inside basket and a breakaway stuff during the run.

Michael McDonald scored on a drive to start a 7-1 spurt, then capped it with a 3-pointer to make it 80-67 with 2:10 remaining, and the Wildcats were finished.

Stanford led 23-21 when Wright sat down with two fouls with 8:18 to go in the first half. The Cardinal outscored Arizona 21-13 the rest of the half.

"The first half we played decent, but Stanford is too good to only play decent," Woods said. "You have to play 100 percent against them, or you are going to be in trouble."

Mendez made five of seven shots and scored 14 in the half. Jacobsen added 10, including a 3-pointer at the halftime buzzer.

"First and foremost, I really feel for coach Olson," Collins said. "He has suffered a tremendous loss. I had the opportunity to meet Bobbi Olson when I came to Arizona for a recruiting trip, and she was an extraordinary lady."