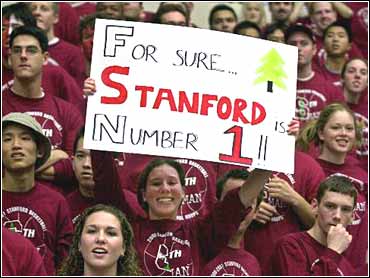 Stanford and Duke remained 1-2 in The Associated Press college basketball poll for the fourth straight week Monday, but there's a new No. 3.

Defending champion Michigan State, which lost to Ohio State on Saturday, dropped from third to fifth, with Kansas and North Carolina each moving up one place to third and fourth.

There were a number of changes in the rankings following a week in which half the Top Ten lost at least one game and six other ranked teams also lost.

Arizona and Wisconsin had the week's biggest jumps, five places to seventh and 10th, respectively, while Wake Forest, which lost to Duke and Cincinnati last week, fell seven places to 16th. For the Badgers, it's their first Top Ten ranking since they were seventh on Dec. 11, 1962.

Three teams Mississippi, Texas and Connecticut dropped out of the rankings, while Notre Dame, Oklahoma and Georgia were the week's newcomers.

Stanford (19-0), still the lone unbeaten team in Division I after sweeping the Washingtonschools in the Pac-10 last week, received 65 first-place votes and 1,745 points from the natMAAC/IAM.htm" target="external">Ional media panel.

The Blue Devils will cap their three-game streak against Top Ten teams when they play host to North Carolina on Thursday night.

Illinois moved up one spot to sixth and was followed in the Top Ten by Arizona, Tennessee, Maryland and Wisconsin.

Notre Dame (13-5), which beat Syracuse and Georgetown last week to run its winning streak to four in a row, moved back into the rankings after being out for two weeks.

Oklahoma (15-4) was only out for one week before re-entering with wins last week over Texas and Nebraska.

Georgia (13-7) stretched its winning streak to six straight with wins last week over Vanderbilt and Tennessee, the latter in double overtime and the third win over a ranked team in that span.

The Bulldogs were last in the Top 25 on Dec. 15, 1997, the first of two seasons under coach Ron Jirsa, who succeeded Tubby Smith. Jim Harrick replaced Jirsa and went 10-20 last season and wasn't expected to have the Bulldogs back on the national scene this quickly.

Mississippi (15-4) was the highest ranked of the three teams that fell out of the poll, dropping from 19th after losing to Mississippi State in its only game last week. The Rebels were ranked for seen straight weeks with No. 19 its highest placing.

Texas (15-5) lost two games last week 75-68 to Oklahoma and 80-52 to Arizona and fell out from 20th. The Longhorns had returned to the poll last week after a one-week absence.

Connecticut (13-6) lost its only game last week to Villanova, extending the Huskies' losing streak to four games. The drop from 24th ended Connecticut's run of 67 consecutive poll appearances, a streak dating to the preseason poll of the 1997-98 season.