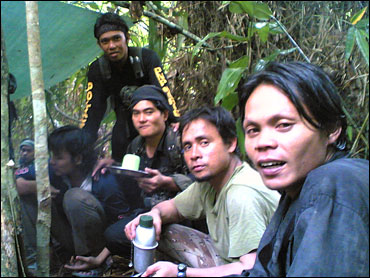 There was no word on the fate of the hostages - a Swiss, an Italian and a Filipino - held for more than two months. The International Committee of the Red Cross expressed concern they could be hurt in a military rescue

The fighting erupted Monday when Abu Sayyaf gunmen led by Albader Parad tried to break out of a loose cordon by government forces to box in dozens of militants and their hostages in hilly jungle near southern Jolo island's Indanan township.

U.S. and Philippine officials have offered a reward for the capture or death of Parad, a young militant notorious for alleged involvement in past kidnappings and beheadings. Last month, Parad acknowledged on television that his group was holding the Red Cross workers.

The military said Parad may have been wounded by marine snipers but there was no immediate confirmation.

"Their safety is paramount. We repeat our call that no action should be taken that could put (their lives) in danger," Alain Aeschlimann, head of ICRC Southeast Asia-Pacific operations, said in a statement.

The workers were kidnapped Jan. 15 after inspecting a Jolo jail water project.

So far, military officials have refrained from a rescue operation to ensure their safety and allow local officials to negotiate their release.

The Abu Sayyaf, however, has demanded the military back off from its stronghold before any negotiation. The government has rejected that.

The Abu Sayyaf has about 400 members and is on a U.S. list of terrorist organizations for its links with al Qaeda and involvement in kidnappings, bombings and beheadings.

Officials say the guerrillas may have resorted to a rash of kidnappings to raise badly needed funds after they lost most connections to foreign financiers when many of their commanders were killed in U.S.-backed offensives.