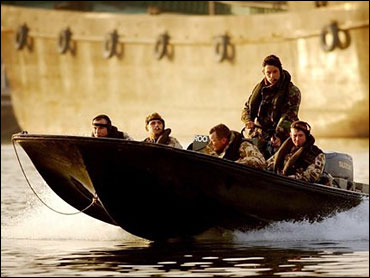 Naval forces of Iran's hardline Revolutionary Guards seized 15 British sailors and marines at gunpoint Friday in Iraqi waters of the Persian Gulf, U.S. and British officials said. The provocative move comes during heightened tensions between the West and Iran.

Iran insisted the British service members were seized because they had entered Iranian territory and were held "for further investigation," according to Iranian state television.

U.S. and British officials said the incident occurred during a routine inspection of a merchant ship near the disputed Shatt al-Arab waterway, which flows between the two countries and empties into the Gulf. The inspections were part of an ongoing operation to intercept smugglers, insurgents and terrorists, and to protect Iraqi oil terminals, CBS News correspondent Allen Pizzey reports.

The inspection went without a hitch and the British inflatable rafts that the service members use were on the way back to their mother ship when six Iranian Revolutionary Guard naval vessels surrounded them, Pizzey reports.

A U.S. Navy official in Bahrain, Cmdr. Kevin Aandahl, said Iran's Revolutionary Guard naval forces were responsible and had broadcast a brief radio message saying the British had not been harmed.

In London, the British government summoned the Iranian ambassador to the Foreign Office and afterward, British Foreign Secretary Margaret Beckett said he "was left in no doubt that we want them back."

Iranian television quoted a Foreign Ministry official as saying that Tehran had also summoned the top British diplomat in Tehran to protest the "illegal entry" into Iranian waters.

"This is not the first time that British military personnel during the occupation of Iraq have entered illegally into Iran's territorial waters," the official was quoted as saying.

(CBS)
Britain's Defense Ministry said the Royal Navy personnel — assigned to the frigate H.M.S. Cornwall — were "engaged in routine boarding operations of merchant shipping in Iraqi territorial waters," and had completed a ship inspection when they were accosted by the Iranian vessels.

The British sailors were part of a task force that protects Iraqi oil terminals and maintains security in Iraqi waters under authority of the U.N. Security Council.

As CBS News national security correspondent David Martin reports, U.S. and British Navies routinely stop and search suspicious vessels in the Gulf, sometimes under the noses of the Iranian Navy, which jealously guards a disputed boundary line in the channel leading to the Iraqi port of Basra.

"I've got 15 sailors and marines who have been arrested by the Iranians and my immediate concern is their safety," Lambert told British Broadcasting Corp. television. Lambert said he hoped it was a "simple mistake" over territorial waters.

"The British government is demanding the immediate safe return of the people and equipment and we are keeping watch on the situation," Snow said.

CBS News foreign affairs analyst Pamela Falk said: "Military confrontation with Iran in the Gulf is everyone's nightmare scenario. Diplomatic efforts at the U.N. and with the Baghdad conference, which included Iran, were not very successful efforts to keep a cap on Iran's defiance."

The incident occurred as the U.N. Security Council debates further sanctions against Iran over its disputed nuclear program, and amid U.S. allegations that Iran is arming Shiite militias in Iraq.

The U.S. military has leveled similar charges against the Iranians, insisting they are providing weapons including sophisticated roadside bombs used to kill Americans. Iran has denied the allegations.

This week, two Iraqi Shiite militia commanders told The Associated Press in Baghdad that hundreds of Iraqi Shiites have crossed into Iran for training by the elite Quds force, a branch of Iran's Revolutionary Guard thought to have trained Hezbollah guerrillas in Lebanon.

With tensions running high, the United States has bolstered its naval forces in the Gulf in a show of strength directed at Iran. Two American carriers, including the USS John C. Stennis — backed by a strike group with more than 6,500 sailors and Marines — arrived in the region in recent months.

U.S. officials had expressed concern that with so much military hardware concentrated in the Persian Gulf, just such a small incident could spiral out of control and trigger a major armed confrontation.

Earlier this week, Ayatollah Ali Khamenei, Iran's supreme leader, warned that if Western countries want to "treat us with threats and enforcement of coercion and violence, undoubtedly they must know that the Iranian nation and authorities will use all their capacities to strike enemies that attack."

The Britons were in two boats from the Cornwall during a routine smuggling investigation, said the British Defense Ministry.

According to a statement from the U.S. Fifth Fleet, the British sailors had just finished inspecting the merchant ship "when they and their two boats were surrounded and escorted by Iranian vessels into Iranian territorial waters."

"This was a normal, routine boarding," Lambert told CNN. "So we were boarding, it was a vessel that was trading in the area, which had passed one or two `trip wires' that we were concerned about, for example its flag and its call sign and so on. So the boarding party went in to carry out a routine boarding operation."

A fisherman who said he was with a group of Iraqis from the southern city of Basra fishing in Iraqi waters in the northern area of the Gulf said he saw the Iranian seizure. The fisherman, reached by telephone by an AP reporter in Basra, declined to be identified because of security concerns.

"Two boats, each with a crew of six to eight multinational forces, were searching Iraqi and Iranian boats Friday morning in Ras al-Beesha area in the northern entrance of the Arab Gulf, but big Iranian boats came and took the two boats with their crews to the Iranian waters."

The seizure of the British vessels, a pair of rigid inflatable boats known as RIBs, took place in long-disputed waters just outside of the mouth of the Shatt al-Arab waterway that divides Iraq from Iran.

A 1975 treaty recognized the middle of the waterway as the border. Saddam Hussein canceled the treaty five years later and invaded Iran, triggering an eight-year war. Iran disputes Iraq's jurisdiction over the waters near the mouth of the Shatt al-Arab.

"It's been in dispute for some time," Aandahl said. "We've been operating there for a couple of years and we know the lines very well. This was a compliant boarding, this happens routinely. What's out of the ordinary is the Iranian response."

In June 2004, six British marines and two sailors were seized by Iran in the Shatt al-Arab. They were presented blindfolded on Iranian television and admitted entering Iranian waters illegally, then released unharmed after three days.

Vali Nasr, a senior fellow for Middle East Studies at the Council on Foreign Relations, suggested that the latest detentions may be Iranian retaliation for the arrest of five Iranians in a U.S.-led raid in northern Iraq in January. The U.S. said the five included a Revolutionary Guards general.

"I think Iran sees this as retaliation for the arrest of their own personnel. They have repeatedly said that they want their personnel released," Nasr said. "So they are either signaling that they can do the same thing or they are trying to bring attention to it."