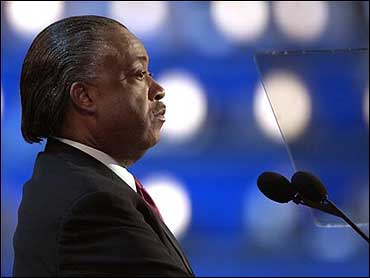 The Reverend Al Sharpton won the hearts of delegates to the Democratic National Convention with a rousing and raucous speech Wednesday night, saying the fact that he was able to run for president is proof that kids can grow up poor and make it in America.

Sharpton repeatedly departed from his prepared text - text that had been scrubbed by John Kerry's staff - and the amended message resonated with the delegates who frequently interrupted his address with cheers and applause.

One of many standing ovations went on for a minute after he told delegates that after the nation failed to deliver on Civil War-era promises of "40 acres and mule" to freed slaves, "we didn't get the mule so we decided we'd ride this donkey as far as it would take us."

He repeatedly slammed the Republican administration.

"In all due respect, Mr. President, read my lips: Our vote is not for sale."

He drew one of the biggest responses when he said: "The issue of government is not to determine who may sleep together in the bedroom, it's to help those that might not be eating in the kitchen."

The convention reception was sweet for a candidate who did poorly in the primaries even while often starring in the debates. He finished a distant third in his home state New York primary with just 8 percent of the vote.

"I think the response was tremendous," he said after the speech. "I felt like I was in a church service after a while."

The Ohio congressman, whose opposition to the Iraq war was central to his run for the nomination, said the country needs "courage to shake off the administration's deceptions, their attacks and their fear-mongering."

Kucinich won more than 60 delegates in the primary season but freed them this week. Many stuck with him in Wednesday night's roll call just the same.

"This is not a vote against John Kerry," said delegate Josh Pendleton of Aurora, Colo. "We will support Kerry in November. We needed recognition that there is a progressive force in the Democratic Party."

By Marc Humbert and Andrew Welsh-Huggins