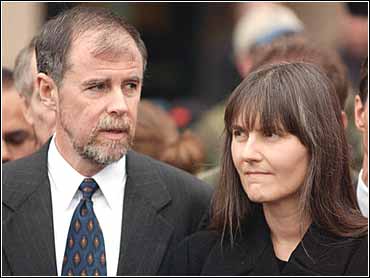 Two years after they last saw their son, the parents of John Walker Lindh came to offer him their steadfast love and a spirited defense.

The parents, who are separated, watched their son's first, brief federal court appearance from the second row in the courtroom mindful that the process could end with his imprisonment for life if he should be convicted of helping his country's enemies.

Grim-faced, they then spoke briefly to reporters outside.

Marilyn Walker said it had been wonderful after a two-year absence to spend time with her son, at a brief meeting before the hearing.

"My love for him is unconditional and absolute," she said softly. "I am grateful to God that he has been brought home to his family, me, his home and his country."

Read about John Walker Lindh's
day in court.
She appeared to have more to say but, on the verge of tears, left the microphone to be comforted by the elder Lindh.

The parents last saw their son, now 20, two years ago when he left the United States for Yemen to study Arabic and Islam. From that country on the Saudi peninsula, Lindh traveled to Pakistan, then Afghanistan.

Before Thursday's hearing, with Lindh's defense lawyers saying they urgently needed time with him, the parents had just 20 minutes for a family reunion in a courthouse interview room - separated from their son by a wire screen and, unlike his lawyers, monitored by the FBI, according to attorney James Brosnahan.

Lindh was returned to the United States on Wednesday aboard a military cargo plane. His parents, and attorneys they hired to represent their son, arrived Wednesday night from their homes near San Francisco but were turned away from the detention center where Lindh was imprisoned.

Frank Lindh said the two are grateful their son, a little heavier and shorn of the scraggy, dark hair and long beard familiar to Americans from pictures taken after Lindh's capture in Afghanistan, was in good physical condition.

But Frank Lindh said the two were upset to learn from their son that he had not received medical treatment until he was transferred to a U.S. naval ship almost two weeks after his capture.

U.S. authorities found Lindh holed up with Taliban fighters after a bloody prison uprising near the northern Afghan city of Mazar-e-Sharif in which a CIA officer was killed. Lindh was shot in the leg during the uprising.

Lindh's attorneys met with him for a lengthy second session after the hearing, but his parents - who must have permission from the U.S. attorney's office to see their son - did not.

Instead, they left the courthouse accompanied, like all other players in this dama, by their own security detail.

By Jennifer Loven © MMII The Associated Press. All Rights Reserved. This material may not be published, broadcast, rewritten, or redistributed