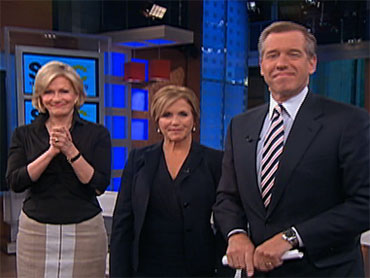 Every day cancer kills 1,500 people in this country alone. Every year, 8 million deaths worldwide are caused by cancer. But there is good news: "Stand Up 2 Cancer," a grassroots movement raising funds to support dream teams of scientists is breaking through barriers that have kept cancer such an intractable foe in so many lives.

"CBS Evening News" anchor and managing editor Katie Couric told the "The Early Show" Wednesday that people can help accelerate the progress against cancer by joining in the effort, which has raised more than $100 million for cancer research so far.

Couric said, "Two years ago, CBS, ABC, and NBC joined forces for an unprecedented telecast in support of 'Stand Up To Cancer.' The goal was to raise funds and awareness for a new model of cancer research. I recently got together with my counterparts at the other networks to review the progress."

Couric, ABC's Diane Sawyer and NBC's Brian Williams shared the story of the past two years.

Williams said, "We asked people to give money. Enough people are standing up and saying they're fed up and they don't want to see this come rolling through their families once again."

Couric said, "We're working with teams of scientists across the country. And the key word is collaboration. Often times these scientists have been working at individual institutions, but 'Stand Up 2 Cancer' forces them to collaborate, to share their resources, their experience and their expertise. And so it's moving science forward faster."

Sawyer added, "We all know that even in the most rarified and difficult worlds of microscience, being in a room with somebody who's working on it too and they say, 'Did you ever-but I-what-yes!' It's common communication conversation and support. They end up supporting each other in ways that they probably didn't dream they could do either."

As for results, Couric pointed out, the research must show benefits for patients within three years.

"That's really warp speed in the world of cancer research," she said.

Willaims said, "Their work right now is moving in on what could encompass two-thirds of all cancer deaths."

Dr. Craig Thompson, of the University of Pennsylvania is the leader of the Stand Up 2 Cancer pancreatic "dream team." He told reporters, "We've delivered on the promise of a new blood test for cancer, in a way that is going to actually be informative not only for pancreatic cancer but other cancers like leukemia and brain cancer. And that is exciting. By working together new positive things happen that are really exciting and driving us forward as a team."

Couric said, "Recently scientists and researchers discovered the epigenome, which is the material surrounding the DNA. Sometimes it sends inaccurate signals and actually causes cancer. They have found that by manipulating this material or reversing how it's behaving, they can actually attack the cancer itself."

But they're not finished. The Stand Up To Cancer effort will be renewed on Friday, September 10 at 8 p.m. ET on CBS, ABC and NBC. The special telethon promises to be a great night of entertainment as people raise money to fight this disease.

Buy a star on the "Stand Up 2 Cancer" site for $1
Fewer Cancer Deaths: $73.6 M For Research
Networks Join Forces To Fight Cancer
Sheryl Crow Stands Up to Cancer Again

For more with Couric and the Stand Up To Cancer effort -- and how Jim Parsons of "The Big Bang Theory" pitched in to help -- click on the video below.