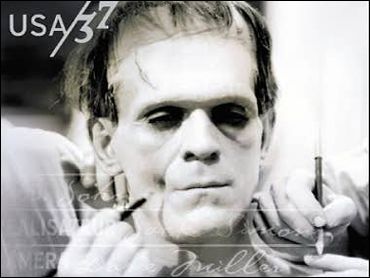 It's Lights! Camera! Stamps! in Hollywood Tuesday, as the U.S. Postal Service issues what may be the blockbusters of the year.

"You have directors, costume people such as Edith Head, you have editors, sound people, music people, makeup," said Terry McCaffrey, chief of stamp development for the USPS.

The other subjects are art direction, cinematography, special effects and direction. The latter stamp features director John Cassavetes working on "Husbands" (1970), in which he also acted.

The films featured range from 1933's "Frankenstein" for its make-up to 1982's "E.T." for special effects. Others include "Gone With The Wind" and "Citizen Kane," and in the margin of the sheet of stamps, Cecil B. de Mille and "Cleopatra" are featured.

Some of the films and people have been honored before: Max Steiner, depicted on the music stamp, was honored 3½ years ago as a Hollywood Composer. There were stamps for "E.T.," "Citizen Kane," and the book version of "Gone With The Wind" in the "Celebrate The Century series, and the GWTW film was one of four classic films from 1939 commemorated in 1990. Frankenstein was one of five Movie Monsters in 1997.

Stamp collector reaction to the designs has been mixed. Each stamp is intended to represent a frame of film. The text on the back of the stamp sheet was written by Entertainment Tonight film critic Leonard Maltin.

Maltin is expected to attend the ceremony, along with actress Gena Rowlands, the widow of Cassavetes, Sara Karloff, whose father, Boris Karloff, appears as Frankenstein's Monster on the "Makeup" stamp, and actor Karl Malden, a long-time member of the Citizens' Stamp Advisory Committee, which helps choose stamp subjects and designs.

The Postal Service is hoping for a big media hit by issuing the stamps at the Academy of Motion Picture Arts and Sciences' Samuel Goldwyn Theater, as the Academy Awards ballots are being mailed.

"The stamps will be affixed to the envelopes, to all 4,500 Academy members for their ballots, and then they'll be canceled 'first day of issue,' so the envelopes will become collectors' items," McCaffrey said.

It will be a real challenge for stamp collectors and movie buffs to try to obtain not just one of those ballot envelopes, but all 10 different stamps on them.

The nominations were announced Feb. 11, and the Oscars themselves will be presented March 23.

These are not the only movie stamps this year: One honoring Audrey Hepburn as one of the Legends of Hollywood is coming out in May.

These self-adhesive stamps should be in local post offices Wednesday.