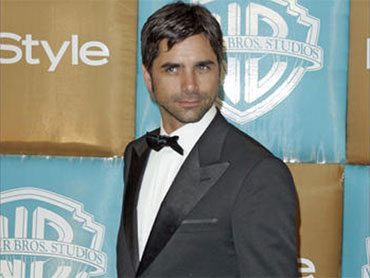 Lawyers for a Michigan couple accused of trying to extort $680,000 from actor John Stamos said Thursday that his private life should be fair game when the couple's trial begins next week.

Defense attorneys urged a judge to allow them to ask questions about Stamos' sex life and whether he had an intimate relationship with defendant Allison Coss. Prosecutors said Stamos, who is expected to testify, denies any such relationship with Coss.

Coss and Scott Sippola are accused of demanding money from Stamos, saying they had photos of him with cocaine and strippers that they could sell to a magazine. Federal prosecutors said the photos don't exist and the actor's private life is irrelevant to the charges.

Defense lawyers have denied an extortion attempt and argue offering Stamos the opportunity to buy the photos, which they claim were lost or destroyed during an FBI raid, before the couple approached magazines wasn't illegal. In a separate action earlier Thursday, U.S. District Judge R. Alan Edgar said there has so far been no evidence the FBI lost any photos and declined to draft a jury instruction that could cast doubt on the government's case.

The trial is scheduled to begin Monday in Marquette in Michigan's Upper Peninsula. Coss and Sippola are charged with conspiracy and other crimes. Coss and Stamos have known each other since meeting in Florida in 2004.

Defense lawyers argue Stamos' personal life is a key element to the case.

"It appears that the government has anointed itself Mr. Stamos' personal public relations committee whose primary purpose is to avoid any discomfort whatsoever to its star witness," Sippola's attorney, Sarah Henderson, wrote in a court filing.

"If the witness does have a lifestyle that influences the witness' credibility, the lifestyle is important," Stupak wrote. "Certainly information delivered by a virtuous person such as a Mother Teresa is judged more reliable than information that may be testified to by a person with a Lindsay Lohan reputation."

"The defendants are merely attempting to paint Mr. Stamos in a bad light in the hopes of gaining an acquittal on that basis," Vermaat said in a filing this week.