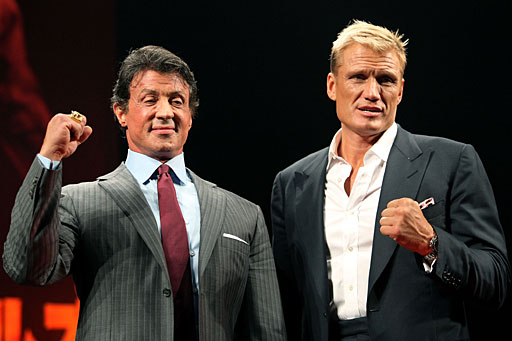 (CBS/AP) The 2011 class for induction into the Boxing Hall of Fame and Museum includes two legendary fighters and one legendary actor who, some argue, did as much to raise the sport's profile as any pugilist ever did.

Sylvester Stallone, the writer and lead actor of the "Rocky" movie (and director of some of its 5 sequels,) was honored with induction after a vote of boxing writers and historians. Joining him are "Iron" Mike Tyson and "Mr. KO" Julio Cesar Chavez.

"Rocky" was released in 1976, and was nominated for 10 Academy Awards, winning best picture, best director and best film editing.

"It has been my privilege to have been blessed with the ability to write about the incredible courage and commitment of the many thousands of real-life Rockys whom we have watched perform honorably in the ring," Stallone said in a statement.

Stallone also wrote five other movies based on the Rocky Balboa character and in 2006, was awarded the Boxing Writers Association of America award for "Lifetime Cinematic Achievement in Boxing," reports the Associated Press.

Perhaps just as famous as Stallone and Rocky is the self-proclaimed "baddest man on the planet," Mike Tyson. Iron Mike won his first 19 professional bouts by knockout, 12 in the first round, the AP reports.

"I am honored," Tyson said. "The sport of boxing has given me so much, and it is truly a blessing to be acknowledged alongside other historical boxing legends because they paved the way for me, as I hope I have inspired others in this great sport."

What's Next for Boxing Champ Manny Pacquiao? Mike Tyson: I Wish I Had Smoked Weed with Tupac Tyson's Next Opponent: A Featherweight

Tyson electrified boxing with his devastating punching power and crude off-the-cuff remarks. When he beat journeyman Jesse Ferguson in his first nationally televised fight after a stunning uppercut sent blood spattering into the ringside seats at Houston Field House in Troy, N.Y., Tyson said, after the bout was stopped in the sixth round, that he tried "to push the bone into the brain."

Tyson won the WBA title with a 12-round decision over James Smith in 1987 and unified the titles later in the year with a 12-round victory over IBF champion Tony Tucker. Tyson defended the unified titles in victories over Larry Holmes, Tony Tubbs, Frank Bruno and Carl Williams, then stopped Michael Spinks in 91 seconds to earn universal recognition as champion in 1988.

Both cocky and shy with the lispy voice of a little boy, Tyson's time at the top was fleeting. He suffered a stunning 10th-round knockout loss to James "Buster" Douglas on Feb. 11, 1990, in Tokyo. After rebounding with four victories, a proposed title fight in 1991 with Evander Holyfield was postponed because of a rib injury. Tyson was then incarcerated for rape from 1992-95, and ensuing bizarre behavior took over his career from that point.

"Mike Tyson was the Notre Dame of boxing," said former AP boxing writer Ed Schuyler Jr., who was inducted into the Hall of Fame in June. "People paid to see him fight, hoping he would destroy somebody or get destroyed. The haters watch as much as the lovers, you know."

Tyson reclaimed the WBC and WBA titles in 1996 by knocking out Bruno in three rounds and Bruce Seldon in the first. But that same year, he lost the WBA belt to Holyfield in 11 rounds and was disqualified in their 1997 rematch after biting both of Holyfield's ears.

From 1999-2001 Tyson fought six times, beating Frans Botha in five rounds, Lou Savarese in one, and Brian Nielsen in seven. In 2002, Tyson suffered an eighth-round knockout in an unsuccessful title bid against Lennox Lewis and retired in 2005 with a 50-6-2 record with 44 knockouts.

In the end, Tyson made more than $300 million. Not bad for a kid who went from the bowels of Brooklyn, to reform school, to D'Amato's gym in upstate New York. Eventually, he was called heavyweight champion, he was called inmate No. 922335 at the Indiana Youth Center, and he was called a legend. Now, he can be called a Hall of Famer.

So, too, can Chavez, whose trademark was the knockout. The three-division champion registered 88 before retiring five years ago with a professional record of 107-6-2. The man who grew up in an abandoned railroad car with his five sisters and four brothers was nearly rendered speechless by his selection.

"I feel humble," Chavez said. "At this moment in my life, to be inducted into the Hall of Fame is very special. I feel great to know that my name will be inscribed with the best of the best, to join some of my heroes and to leave a mark for my family and my country."

Inductees were voted in by members of the Boxing Writers Association of America and a panel of international boxing historians.