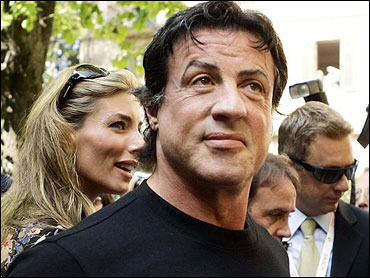 Sylvester Stallone has apologized for importing banned muscle-building substances into Australia, saying he had taken the drugs for years for a medical condition but bringing them into the country was "a terrible mistake."

Stallone, through his lawyers, pleaded guilty Tuesday in a Sydney court to bringing in dozens of vials of human growth hormone and testosterone - restricted drugs in Australia - during a tour to promote his film, "Rocky Balboa," in February.

"I made a terrible mistake, not because I was attempting to deceive anyone but I was simply ignorant to your official rules," Stallone, who was allowed to leave Australia after the tour and was not required to return for the hearing, said in a letter to the judge.

The 60-year-old star of the "Rocky" and "Rambo" movie franchises will be sentenced on Monday after pleading guilty. Stallone is almost certain to be fined, though his lawyers asked Deputy Chief Magistrate Paul Cloran not to register a criminal conviction against the actor for what they said was an honest mistake.

"I feel terrible that my breach of the rules has set a poor example to members of the public, whose opinion I cherish dearly," Stallone said in his letter to the court. "I have never supported the use of illegal drugs or engaged in any illegal activities in my entire life."

Stallone said the drugs had been prescribed to him for a medical condition and that he was carrying large amounts of them because he was about to go on location for three months in Thailand to shoot another movie.

"Years ago I was diagnosed with a condition and my doctors prescribed human growth hormone and testosterone for its treatment," he said. "Under medical supervision I have continued to use both medications."

Stallone was charged after a customs search of his luggage at the start of a three-day visit to Sydney in February revealed 48 vials of the human growth hormone drug, Jintropin.

Three days later, Stallone threw four vials of the male hormone testosterone out the window of his Sydney hotel room when customs officials arrived to search it, prosecutor David Agius told the court.

Human growth hormone, a naturally occurring substance that can be replicated synthetically and is used to build muscle mass, is considered a performance enhancing drug in Australia and it cannot be imported without a permit from the national drug regulator, the Therapeutic Goods Administration.

Human growth hormone is available in Australia and the United States by prescription to treat specific medical conditions such as hormone deficiency and stunted growth in children.

The drugs are more widely available in the United States, where proponents say their benefits can range from helping athletes increase muscle mass to restoring the energy of an elderly person. Scientists do not agree on the benefits.

Boulten said Stallone had been taking the drugs under medical supervision for at least six years, and did not realize he needed a license to bring them into Australia.

"This is not some back-alley body builder dealing covertly with some banned substance in some sort of secret way," he said. "This was a legitimate medical condition being treated by doctors of the top ranking order in the west coast of the United States."

But Agius said Stallone had demonstrated a "consciousness of guilt" by throwing the testosterone from the hotel, and a criminal conviction as well as a fine was appropriate.

He also questioned why, if the drugs were legitimately prescribed, the actor was carrying Jintropin, a Chinese-made human growth hormone product that has not been approved by the U.S. Food and Drug Administration.

Cloran said it was not for him to rule on whether Stallone obtained the drugs within U.S. law.