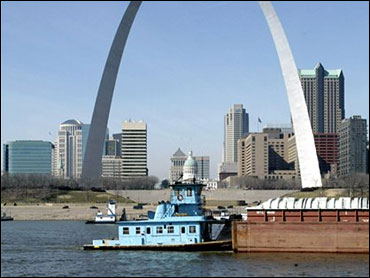 Just days after the St. Louis Cardinals won the top honor in Major League Baseball, their hometown jumped to first place on a list no one wants to lead: the most dangerous cities in the United States.

This Midwestern city has long been in the upper tiers of the annual ranking of the nation's safest and most dangerous cities, compiled by Morgan Quitno Press. Violent crime surged nearly 20 percent there from 2004 to last year, when the rate of such crimes rose much faster in the Midwest than in the rest of nation, according to FBI figures released in June.

"It's just sad the way this city is," resident Sam Dawson said. "On the news you hear killings, someone's been shot."

The second most dangerous city was Detroit, followed by Flint, Mich., and Compton, Calif.

The rankings, released early Monday, came as the city celebrates Friday's World Series victory at the new Busch Stadium. St. Louis has been spending millions of dollars on urban renewal even as the crime rate climbs.

Among Ohio cities, Cleveland was ranked as seventh most dangerous; Youngstown at No. 9 and Cincinnati, 18.

Scott Morgan, president of Morgan Quitno Press, a private research and publishing company specializing in state and city reference books, said he is not surprised to see St. Louis top the list, since it has been among the 10 most dangerous cities for years.

Morgan said the study looks at crime only within St. Louis city limits, with a population of about 330,000. It doesn't take into account the suburbs in St. Louis County, which has roughly 980,000 residents.

Cities are ranked based on more than just their crime rate, Morgan said. Individual crimes such as rape or burglary are measured separately, compared to national averages and then compiled to give a city its ranking. Crimes are weighted based on their danger to people.

While crime increased in all regions last year, the 5.7 percent rise in the 12 Midwestern states was at least three times higher than any other region, according to the FBI.

Visiting St. Louis on Thursday, FBI director Robert Mueller said it was too early to tell why some types of crime were rising faster in the Midwest.

This year's ranking was good news for Camden, N.J., which in 2005 was named the most dangerous city for the second year in a row.

Camden, N.J., Mayor Gwendolyn Faison said Sunday she was thrilled to learn that her city no longer topped the most-dangerous list.