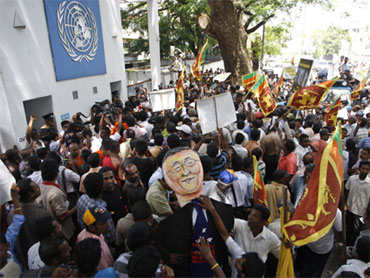 Hundreds of protesters, led by a government minister, laid siege to the U.N. compound in Colombo on Tuesday, refusing to let workers out in an effort to force the world body to cancel its investigation of alleged abuses committed during Sri Lanka's civil war.

Police tried to break up the protest in the evening and escorted some of the trapped workers out of the compound, but quickly pulled back after Housing Minister Wimal Weerawansa - who led the protest - ordered them to stop, leaving some U.N. staff trapped inside.

Later, four Westerners left the building after the country's Foreign Secretary Romesh Jayasinghe, who was apparently negotiating with the protesters, entered and left himself. Protesters said they were the last of the staff who had been stuck inside.

United Nations associate spokesman Farhan Haq confirmed that U.N. staff who were blocked inside the building were allowed to leave their offices by the end of the day. He said that followed U.N. contacts with senior Sri Lanka officials in New York and in Colombo and interventions by the government.

Wasantha Bandara, one of the protesters who accompanied Jayasinghe into the U.N. building, said the protests would continue to sit outside the building but added that their intention was not to hold the staff hostage.

Haq voiced the United Nations' "serious concern" over the obstruction of its staff, and said it happened despite assurances from the prime minister on Monday that "the government would abide by its obligation to ensure our security."

"Obviously, what happened today was different from those assurances," Haq said.

"We take this quite seriously and anything that hinders the movement of staff is a serious concern, and we are trying to make sure that the government will honor its commitments to make sure that our work can be carried out without hindrance." he said.

Between 125 and 200 people were trapped in the compound when the protesters first descended on the building, according to a U.N. official inside the building who spoke on condition of anonymity because of the sensitivity of the situation.

Earlier the protesters had burned effigies of United Nations Secretary-General Ban Ki-moon to protest a panel he established to examine whether government forces committed atrocities against minority Tamils when the country's quarter-century civil war drew to a close last year.

The government opposes the panel and has already said it will not issue visas to its members, led by former Indonesian Attorney-General Marzuki Darusman.

Human rights groups have accused the troops and Tamil rebels of deliberately targeting civilians and killing thousands of innocent people in the final months of the war.

The accusations have infuriated top government officials and sparked earlier violent protests outside the Red Cross compound and the British High Commission in Colombo.

As police looked on Tuesday, Weerawansa and a group of ultranationalist Buddhist monks led men waving national flags on a march to the U.N. office. The protesters initially tried to break into the compound, which sits inside a high security zone protected by checkpoints and soldiers, but failed to breach the high walls. 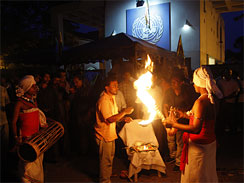 (AP Photo/Eranga Jayawardena)
Instead, they held a sit-in, blocking both exists, spray-painting the security camera at the gate - in an apparent bid not to be identified - and preventing employees working inside from leaving.

"Our armed forces have beaten terrorism in an exemplary manner. We will not allow our soldiers and political leaders to be taken before an international war tribunal," Weerawansa said. "We ask Ban Ki-moon to withdraw this panel if he wants to get the workers and those inside the building out."

Weerawansa said the panel could lead to unfair prosecution of soldiers and political leaders who helped defeat the Tamil rebels after a long and bloody civil war.

Government troops crushed the Tamil Tiger rebels last year, ending their 25-year campaign for an independent state for ethnic minority Tamils. According to the U.N., more than 7,000 civilians were killed in the last five months of the fighting alone.

Sri Lanka has faced growing international criticism of its wartime conduct. Rights groups have said they have photographic and video evidence of abuses and have called for war crimes investigations.

Sri Lanka has denied targeting civilians and has appointed its own reconciliation commission, but that body is not expected to look into the war crimes allegations.