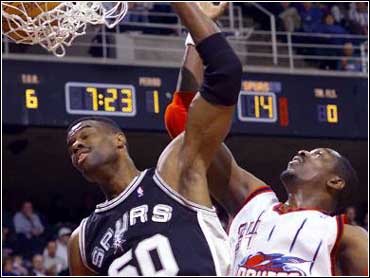 Tim Duncan scored 17 of his 25 points in the fourth quarter and overtime to lead the San Antonio Spurs to a 113-111 victory over the Houston Rockets on Sunday night.

Duncan, who had just eight points and seven rebounds through three quarters, fueled an 11-2 run in the fourth for the Spurs.

Duncan scored 13 and had four rebounds in the fourth, and added four points and a key steal in overtime to lead the Spurs to their eighth straight victory against the Rockets.

Mario Elie had 19 points, and Avery Johnson 16 points and 13 assists for San Antonio, which trailed by as many as 13 in the second and third quarters.

Hakeem Olajuwon made his first start since undergoing hernia surgery on Nov. 27 and scored 21 points and had nine rebounds as the Rockets' five-game home winning streak was stopped. Cuttino Mobley added 20 points, and Steve Francis 19 points and 12 assists for Houston.

In the overtime, Duncan made his first shot, then converted two free throws with 35 seconds left to give San Antonio a 109-107 lead. He then made a key steal with 22 seconds to play. Terry Porter and Elie each hit a pair of free throws in the final 20 seconds to seal the victory.

San Antonio went ahead by 10 in the first quarter behind the shooting of Elie and David Robinson.

The Spurs hit five 3-pointers, including three by Elie, in the first quarter for a 29-25 lead.