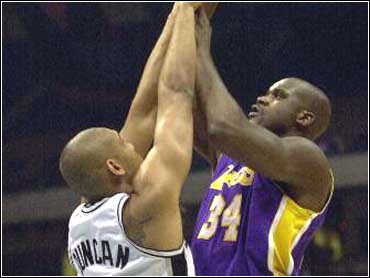 It has been almost three weeks since the Los Angeles Lakers' 16-game winning streak ended, and never did they look further removed from such success than Tuesday night.

The San Antonio Spurs made the Lakers look lazy and lousy in a dominating 105-81 victory that helped knock Los Angeles out of first place in the overall NBA standings.

Tim Duncan had 29 points and 18 rebounds, Avery Johnson tied his season-high with 22 points, Terry Porter scored 15 and David Robinson had 14 points and 12 rebounds for the Spurs, who sent the once-mighty Lakers to their fourth loss in five games.

"Everybody's saying it's the difference in the Lakers, but we played a lot better than we usually do," Duncan said. "We shot the ball well, we defended solid, make fewer mistakes than we did (against Los Angeles) on Christmas Day and didn't give up as many layups as we did."

"It's the NBA, on any given night anything can happen, and this was a great night for us."

This loss had to be particularly disturbing for the Lakers, who showed little discipline or cohesion as they frequently abandoned the triangle offense for ill-advised shots and matched their lowest point total of the season.

San Antonio led by five after one quarter, by 10 at halftime, by 17 after three quarters and by as many as 28 in the fourth in handing the Lakers what was easily their most lopsided loss of the season. Previously, the Lakers' worst loss was by 16 points against Houston in the seventh game of the season.

"We have to figure out what we're doing wrong and correct it," Kobe Bryant said. "We're dwn because we've lost a couple games in a row here."

The Lakers tumbled out of first place in the Pacific Division a spot they held since Dec. 14 when the Portland Trail Blazers beat visiting Chicago 92-81 on Tuesday night.

For San Antonio, the victory avenged a loss to the Lakers on Christmas Day. The Spurs shot 52 percent to improve to 11-0 when making at least half their shots and 14-1 when scoring at least 100 points.

Shaquille O'Neal, who was in foul trouble much of the night, scored 31 to lead the Lakers.

Los Angeles allowed an opponent to shoot 50 percent for only the second time this season.

"We have to get back to the basics to get back on track. We will," O'Neal said. "We're not playing well, not hitting shots, not playing good defense. We just have to look in the mirror at our individual selves and pick it up."

"Whenever we don't play smart, this is the outcome."

Duncan had 18 points and 10 rebounds in the first half, which ended with the Spurs ahead 55-45 after they closed the half with a 14-7 run. O'Neal finished the half with three fouls but shot 7-for-8 from the field and scored 17 points.

Mario Elie hit a 3-pointer and Robinson followed with a jumper early in the third quarter to put San Antonio ahead 62-48.

O'Neal picked up his fourth foul with 4:18 left in the third quarter, prompting coach Phil Jackson to turn away from the ensuing play so he could berate the officials, and Duncan followed with a bank shot to up the lead to 71-56.

A 3-pointer by Jaren Jackson, a jump hook by Duncan, a wide-open jumper by Johnson and two foul shots by Elie constituted a 9-0 run that put the Spurs up 80-58 late in the third.

"The reality is we just have to play ball together," Jackson said. "Part of the demise of the winning streak going down the tubes is that we're not playing well together."