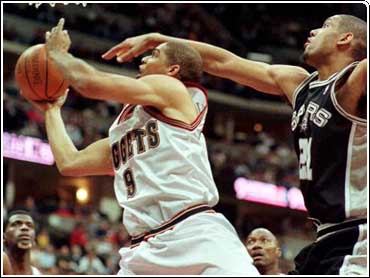 The lead dwindled from 25 points to five before the San Antonio Spurs remembered they were determined to head into the All-Star break on a roll.

"We wanted to build something before the break," Spurs center David Robinson said, "and this was an important closing game for us."

Robinson scored 30 points, Tim Duncan added 24 and Avery Johnson had 19 as the Spurs withstood a fourth-quarter comeback to beat the Denver Nuggets 106-97 on Wednesday night.

"We ran out of gas a little bit and maybe lost interest," San Antonio coach Gregg Popovich said. "Denver took advantage of it, but we got a group on the floor that steadied themselves and finished it off."

The Spurs, who lost 86-84 in their last visit to Denver on Dec. 18, built a 25-point lead midway through the second quarter and still led by 17 entering the final period.

Denver, which had lost its three previous games by blowing leads in the fourth quarter, tried to reverse the scenario, fashioning a 17-3 run capped by Chris Gatling's running hook shot to cut the deficit to five points, 93-88, with 4:42 left.

The Nuggets got no closer, however, as Robinson and Terry Porter combined for the Spurs' last 13 points.

Porter's two free throws and 15-foot bank shot made it 97-88, and Robinson's fastbreak dunk capped a 7-0 flurry in the closing minutes.

"Our defense and steals got us the big lead," Duncan said. "They got back into it, but David made some plays down the stretch to put them away."

Duncan also had 13 rebounds for his 43rd double-double of the season and added eight seals.

Nuggets coach Dan Issel played his bench in the fourth quarter but insisted he wasn't sending a message to his starters.

"The guys that play hard and the guys who give an effort are the guys who are going to get playing time," Issel said. "You can't dig a hole like we did against a team like San Antonio and expect to have a chance to win. The group that brought us back played hard and carried out their defensive assignments. They played like they cared, like they were tired of getting embarrassed."

The Nuggets, who committed a season-high 26 turnovers, fell five games below .500 (21-26) for the first time this season.

Nuggets point guard Nick Van Exel failed to score in the first half and sat out the second half after aggravating a lingering groin injury.

"Nick is too sore to play," Issel said. "He wasn't even able to get up and down the floor. It's just going to be a day-to-day thing. Hopefully, the three days off at the All-Star break are going to help him. I can't say if he will play (Thursday night in Sacramento)."

The Spurs built an early 12-point lead, extended it to 15 points at the end of the first period and to 23 at halftime.

Two free throws by Duncan capped a 7-0 run that gave the Spurs a 20-8 lead with 5:29 left in the first period. Duncan had 14 points in the quarter, during which San Antonio hit 10 of 11 free throws while Denver didn't go to the line. The Nuggets committed nine turnovers in the period compared to San Antonio's one.

Back-to-back baskets by Malik Rose and Jaren Jackson's 3-pointer gave San Antonio its biggest lead of the half, 50-25, with 7:49 left in the second quarter.

Gatling had five points during a 12-2 Denver run that cut the deficit to 15 points, but the Spurs then ran off eight straight points, including four free throws by Mario Elie, for a 60-37 lead.

Robinson's layup at the buzzer put the Spurs up 64-41 at intermission.

Posey had eight points in the third quarter to help the Nuggets chip away at the lead.