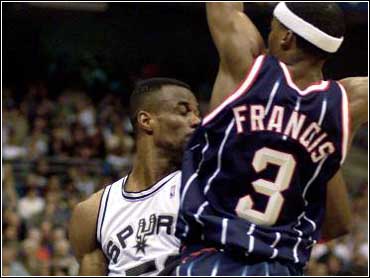 Three days after being scolded by coach Gregg Popovich for lack of effort, the San Antonio Spurs responded with one of their best games of the season, a 116-92 rout of the Houston Rockets on Friday night.

Tim Duncan scored 19 points to lead the Spurs to their seventh straight victory over the Rockets. San Antonio was coming off of a 92-81 loss at Cleveland on Tuesday.

"Obviously we want to get back on track," Popovich said. "From the beginning, the team deserves a lot of credit. They played intense on the defensive and offensive level. I'm happy for them. There were some great individual plays."

"We got to give ourselves credit tonight because we came out intense. We were a little embarrassed by our outing at Cleveland," San Antonio point guard Avery Johnson said. "This was a good game for us."

"We shot the ball well tonight," said Duncan, who was 9 of 15 from the field. "We kept at it. We pushed the ball up the court and when you start getting easy baskets, it makes everything easier."

Houston, which absorbed its worst loss of the season, was led by Steve Francis' 18 points. Shandon Anderson added 14.

"I was really surprised by the fact that we werent competitive," Houston coach Rudy Tomjanovich said. "They beat us to a lot of loose balls. I thought we were supposed to be the young team full of energy. Tonight they ran us off the floor. We couldn't do anything right."

San Antonio, which never trailed, jumped to a 33-24 lead at the end of the first quarter as Robinson had 12 points and the Spurs hit 12-of-20 shots.

The Spurs continued to stretch the lead in the second half, leading by as many as 34 points, 102-68 on Jaren Jackson's 3-pointer with 8:49 to play.

San Antonio and Houston will play for the final time during the regular season this Sunday in Houston.

"Houston is an unbelievably athletic team, they are scary," Popovich said. "It will be a heck of a contest on Sunday. Those guys are going to come back on us. There is too much of a rivalry."