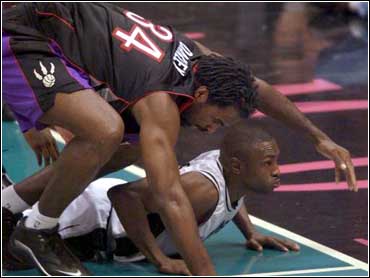 No dunks from Vince Carter, no defense for Tim Duncan.

That was the unfortunate story for the Toronto Raptors on Thursday night as they allowed Duncan to go off for 32 points, 17 rebounds and seven assists in a 112-95 loss to the San Antonio Spurs.

"I couldn't put it in the hole for nothing," said Carter, who shot 6-for-10 in the first half but just 1-for-9 the rest of the way as the Raptors had their four-game winning streak snapped.

With the memory of Carter scoring 39 against them less than a month old, Duncan called it "another revenge game for us" during the team's morning shootaround.

That mindset showed as San Antonio double-teamed Carter nearly every time he touched the ball and held him to 19 points, five below his average.

"We didn't give him an opportunity to look at the basket, figure out what he wanted to do and then go do it," Duncan said. "We made him pass the ball, he didn't have the ball every time down the floor getting easy ones, and that affects people. You get them out of their rhythm and they can't roll."

Duncan shot 11-for-21 from the field and 10-for-10 from the line, doing almost all his damage in the second and third quarters when San Antonio took control with runs of 10-0 and 20-2.

Duncan, who reached 30 points for the 12th time this season, left the game for good with 5:24 remaining and the Spurs ahead by 18.

Avery Johnson added 19 points, Malik Rose had 15 and Terry Porter 13 for the Spurs, who were without David Robinson (bruised shoulder).

"It's a deep contusion and he's got something impinged on the nerve," coach Gregg Popovich said. "He had no strength in the shoulder, and it would have been too dangerous to put him out there. They think within 48 hours he'll be in a lot better shape and ready to go."

Toronto made its first seven shots, and when Doug Christie finally missed one Curry grabbed the offensive rebound and turned it into a 3-pointer for an 18-8 lead. The Raptors were ahead 34-27 after the first quarter, but San Antonio started to take charge midway through the second and used a 10-0 run to go ahead 46-44.

A layup by Duncan with 2:17 left in the first half gave the Spurs the lead for good.

It was 56-51 at halftime as Duncan had 16 points and nine rebounds and Johnson scored 11, and the Spurs quickly opened a double-digit lead in the third quarter as their 20-2 run fueled by six points from Johnson turned the game into a rout.

"You can't lose focus against the world champs, and we did that tonight," Curry said. "They took full advantage of that."