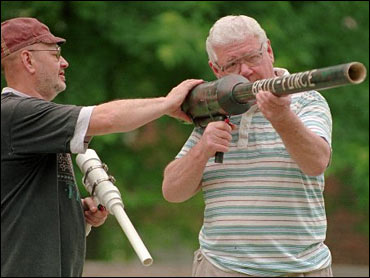 Just when 17-year-old Daniel Berry's life had found new light, he must find his way in the dark.

"It's not right, I'm not used to being blind," he says. "It's a whole new world for me and not one that I would've chosen."

Berry was shot in the face, looking down the barrel of a home-built contraption called a spud gun. When it fired a frog, it blinded him.

A garage in Appleton, Wisconsin may be the center of the spud gun universe; that's where Joel Suprise has a booming business making spud guns of all sizes.

The guns are dangerous, can cause property damage and can cause severe bodily injury, he says.

"It's an item that's designed for fun and recreation but they need to be used safely," says Suprise.

The guns are made of plastic plumbing pipe and fueled by deodorant or hairspray fumes. A barbecue igniter is used for a trigger, and a potato, or anything that fits, goes down the barrel. It's a $60 weapon.

In the eyes of the Bureau of Alcohol, Tobacco, Firearms and Explosives, spud guns are not illegal. But across the country, some towns want them outlawed and police are confiscating spud guns regularly.

One gun was used in a North Carolina drive-by shooting. Another blinded an eye of a Pennsylvania house painter.

"They need to be used under adult supervision, the same with any type of gun," says Surprise.

On the Internet, they're a phenomenon, with nearly 9,000 spud gun hits. Web sites show people how to build or buy them cheap.

Berry had an American dream too.

"I wanted to finish up my college and go to the air force and be a pilot," he says.

Now, he struggles with a new life of talking calculators and the language of Braille.

But he wants his blindness to be his warning of what can happen when people play with any kind of gun.