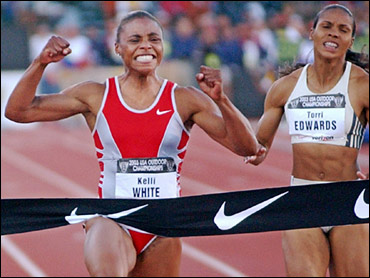 Sprinter Kelli White accepted a two-year ban Wednesday for using performance-enhancing drugs and will not compete in the Olympic Games this summer in Athens.

She was also stripped of every medal she has won in the past four years, including three world championship golds.

White, 27, tested positive for the stimulant modafinil at last year's world championships and U.S. nationals. The U.S. Anti-Doping Agency said it also found evidence she had used a previously undetectable steroid and the endurance-enhancing hormone erythropoietin.

The USADA, based in Colorado Springs, said some evidence was obtained through documents sent by the U.S. Senate in the investigation into BALCO, a California lab that has been implicated in an illegal steroid ring.

White, the first athlete to be suspended based on information from the BALCO case, agreed to help the anti-doping agency in its investigation.

"If I can make a difference in cleaning up the sport, I will have done more for the sport than anything I could have done on the track," she said in a statement.

She apologized for what she called "poor choices."

"In doing this, I have not only cheated myself, but also my family, friends and sport," White said.

Five-time Olympic medalist Marion Jones said last weekend she would sue USADA if it prevents her from going to Athens without a positive drug test, but White said she decided against fighting the suspension.

She will be stripped of her gold medals in the 100 and 200 meters at last year's world championships in Paris, and a gold and bronze at the 2001 worlds in Edmonton.

"I admire her courage in acknowledging these mistakes and accepting responsibility for them," USADA chief executive Terry Madden said.

White's coach, Remi Korchemny, was one of four men indicted earlier this year on charges of illegally distributing steroids and other performance-enhancing drugs to athletes as part of the BALCO investigation.

Slugger Barry Bonds' personal trainer and BALCO's founder were also among those indicted. They have pleaded innocent.