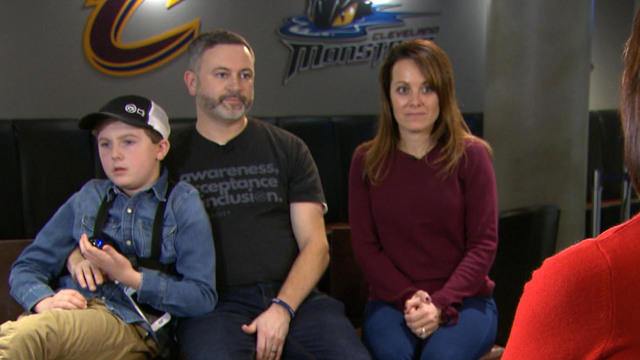 Sunday's NFL Pro Bowl will be the first to cater to the needs of people with sensory issues. Across the country, stadiums and arenas are addressing those needs for every game and event – in large part because of the experience of one family from Akron, Ohio, reports CBS News' Dana Jacobson.

A basketball game or a hockey game seems like it might be an easy thing to go to as a family, but it's not for Jeff and Amy Belles.

"It's not. I think it's challenging from the moment – the anxiety of the unknown. Where are we going? What are we doing? To getting here and parking, and finding a spot over the crowds getting in. And that's before you get to your seat," Amy said.

Going to sporting events with their autistic son Carson can be more anxiety filled than exciting. Large crowds and loud noises can be overwhelming for him. Still, in February 2016 they decided to give a hockey game with Carson a shot.

"It was Autism Awareness Night. And we thought, what a great opportunity," Amy said.

The Cleveland Monsters of the American Hockey League were welcoming autistic fans and their families to a game at its shared home with the Cleveland Cavaliers, Quicken Loans Arena – also known as "The Q." But when the Belles arrived, they felt anything but welcome.

Twelve-year old Carson can't speak and instead uses an electronic device that hangs around his neck to communicate.

"We had trouble in going through security, and the security guard not understanding what Carson's device was, or what it was used for," Amy said. "We were actually told that he couldn't come through security with that. And Carson got a little anxious."

The couple said the security guard then told them to get control of their child.

Amy felt defeated. She couldn't let it go, so she took to social media launching a tweet that read: "Treated very poorly by the Q security last night for Autism Awareness night ... I think some sensitivity training would go long way." Her message reverberated throughout the arena.

Her complaint got the attention of Antony Bonavita, senior vice president for facility operations at the Q.

"I felt like l, you know, missed an opportunity on a professional level, you know, for us to be better than that," Bonavita said.

The Belles' experience hit home for Bonavita. His son Dominick is also on the autism spectrum.

"On a personal level ... I felt like I let him down. You know, ultimately, it falls on me," Bonavita said.

So, he reached out to the Belles family.

"They just listened. And I just gave them some suggestions, some things that I was thinking of … I wanted to make sure they were gonna follow through, this really needs to be done. This can't happen again," Amy said.

The Q responded quickly, working with the Cleveland Clinic on training for staff. The goal? To becoming more inclusive for those with sensory issues ranging from autism to PTSD.

"You know, for any business, you want to be as broad as you can to attract as many different people as you can, that's just good business. But we're more than that. What we mean to this city means more than a business element. We want it to be more about my son or your son or anybody else's parent or somebody who has PTSD to know that they have a home and a place that they can come," Bonavita said.

Now, when a family like the Belleses comes to the Q, they can pick up a sensory-friendly bag. It includes items like fidget toys, a weighted lap pad, and noise-cancelling headphones.

There's also a sensory room, a designated space away from the action that serves as an escape if the sights and sounds in the arena get to be too much. Inside, there's soothing bubble art on the walls and tactile displays that can calm an overstimulated mind.

The Q can thank Michele Kong for the changes. She and her husband Julian Maha are physicians and the parents of two boys, including a 10-year-old who is autistic. They created a nonprofit called Kulture City, focused on a mission of inclusion.

"We saw how having a diagnosis like autism it truly made the families isolated from the community," Kong said. "So the genesis of Kulture City really was us saying, how can we change the culture of a community to one where it is inclusive to all individuals, regardless of their challenges?"

Kulture City started by helping their local zoo in Birmingham, Alabama, become sensory inclusive in 2014. But perhaps their biggest impact has been sports venues. Kulture City has helped 15 NBA and NHL arenas, and one NFL stadium to become sensory aware. Their first, was the Q

"To sit and look around and know that we can do what other families can do is pretty awesome," Amy said.

And the sensory rooms don't cost a lot. According to Bonavita, all it took was some paint, new carpeting, and a little electrical work to turn an underused room into a place where fans with sensory needs can feel welcome.