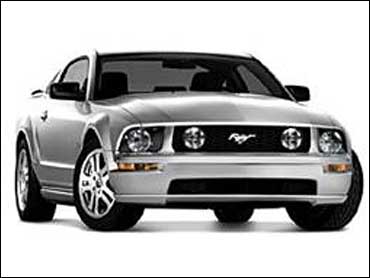 Mention sports cars, and the last thing that comes to mind is the word "affordable."

But, says The Early Show Friday, Gregg showcased several capable of fulfilling your need for speed and style, sans the sticker shock.2006 Ford Mustang CoupeThe 2006 Ford Mustang builds on the successful release of the newly retro-redesigned 2005 Mustang. The new Pony Package Mustang delivers a V6 engine, GT-inspired suspension, larger wheels/tires, ABS, traction control, a custom grille with fog lights, and the trademark Pony emblems. The standard Mustang is powered by a 210-horsepower 4.0-liter V6 engine, and the Mustang GT is powered by a new 300-horsepower 4.6-liter V8. Two new colors have been added to the 2006 models: Vista Blue and Tungsten Grey. Base MSRP: $19,835; Ford.com

The Pontiac Solstice delivers head turning styling thanks to its twin seats and drop top (for those sunny days). This hot rod delivers 177 "horses" under the hood making it capable of going from 0-60 in a mere 7.2 seconds! The power is delivered to the rear wheels via a 5 speed manual transmission . The super responsive handling offers an exhilarating driving experience. The price makes the Solstice a realistic sports car purchase option for those in need of serious style and driving fun. Base MSRP: $20,490; Pontiac.com

The Saturn SKY is one of the hottest and affordable convertibles to hit the American auto market in 2007. With its head turning European styling and upscale interior, this roadster is arriving just in time for summer. The SKY's soft convertible top folds neatly into the rear compartment. While inside, you'll experience a driver-focused cockpit fitted with integrated controls and displays. Powering the rear-wheel drive SKY is a 170- horsepower 2.4L Ecotec engine with variable valve timing. New for 2007, is the Red Line version of the SKY. It is powered by a turbocharged 260 horsepower motor and goes 0-60 in 5.5 seconds! Base MSRP $23,690; Saturn.com

The new and stylish Mazda RX8 is billed as a sports car capable of accommodating a family. In addition to the two conventional doors, the RX8 has two rearward opening doors (also known as suicide doors). The 1.3 litre, twin bank, rotary engine is a mechanical marvel, capable of delivering over 9000 rpms of zoom-zoom! Without using a turbocharger or supercharger, the engine produces 238 horsepower in an RX-8 equipped with a six-speed-manual gearbox. The engine output in models with a four-speed-automatic transmission is 197 hp. Mazda has been dominant in the rotary engine world since the sixties. Base MSRP:$26,995; Mazda.com

2006 Nissan 350Z Coupe
The Nissan 350Z delivers a combination of performance, technology, and design that makes it a unique and affordable offering in the sports car category. A 300-hp factory-tuned 3.5-L VQ motor, under the control of the 6-speed close-ratio, short-throw manual transmission delivers an exhilarating driving experience . Race-inspired engineering features like the Z's advanced multi-link suspension ensures you'll stick to the road when your steering wheel is making wild twists and turns. Available refinements like a Bose audio system and Nissan Navigation System let the driving enthusiast experience the true excitement associated with operating this performance vehicle. Base MSRP: $27,650; NissanUSA.com

What do you get when you take one of Toyota's best selling models of all time (Camry), remove a couple doors and add a ragtop? Answer: The Solara Convertible. This family friendly sportscar is both fun and practical because the rear seats are not an afterthought like in most "four seater" coupes. The Solara is not just a Camry with a ragtop. Thanks to special enhancements like restyled LED tail lamps, HID headlamps, 17-inch alloy wheels, front rear under bumper spoilers, side rocker moldings, rear spoiler and tailpipe diffuser, this sun lovers car will get you noticed when you hit the road. The standard powertrain for the 2007 Solara is a 155 horsepower, 2.4-liter four-cylinder engine with VVT-i. A powerful 3.3-liter V6 delivering 210 horsepower is also available. Three optional interior trim styles are also available. Base MSRP: $27,190; Toyota.com

To read BestStuff.com's take on these cars, click here.

For more BestStuff.com coverage of Gregg's appearances on The Early Show, click here.