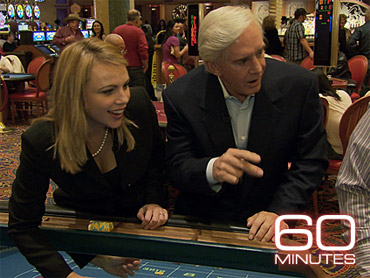 When it comes to gambling, everybody knows the house has the advantage. But there are some high rollers who consistently win, and it's hard to find anyone better at winning than Billy Walters.

He bets on football and basketball, is worth hundreds of millions of dollars, and has been so successful that many Las Vegas bookmakers are afraid to even take his bets.

Walters has been almost as elusive as Howard Hughes, avoiding publicity, reluctant to reveal his secrets.

But after 30 years of unprecedented success, the man who calls himself a Kentucky hillbilly agreed for the first time to open the door into his betting life in Las Vegas - a life he describes as one long hustle - in betting parlors, in pool rooms and on the golf course.

The Super Bowl: America's Biggest Bet
More people bet on the Super Bowl than any other sporting event. So, how does a professional gambler approach the big game?

When Walters golfs, it's mostly for fun. He used to make his living off it. And he showed us how the hustle worked with Gene McCarlie, an old friend and casino owner.

"Who's the better golfer?" correspondent Lara Logan asked Walters and McCarlie on a golf course.

"He is," both men replied simultaneously, laughing.

"By far. Believe me," McCarlie added.

"How much money have you taken off him over the years?" Logan asked.

"When I met him, he was driving an old Cadillac full of bullet holes. Had no air conditioning. Now, he's a very wealthy man," Walters replied.

On the day we went along, the two buddies decided to play for $5,000 a hole, with a few side bets along the way.

"You got it for a dime!" Walters agreed.

Walters just missed a 60-foot putt, but after only three holes, he was up $17,000. Small potatoes for Walters.

"What's the most you've ever made on a hole?" Logan asked.

Asked what his biggest win was on a round of golf, Walters said, "Probably a million bucks, around a million dollars."

"Yes. I never got to bed to with it. I lost it all in the Horseshoe Hotel playing blackjack before I went to bed," he replied.

Asked if there's anything he doesn't gamble on, Walters replied, "Not really."

He gambled on the Super Bowl last year and won $3.5 million. Nevada is the only state in the country where taking bets on individual games is legal. Most bettors come to a sports book inside the casino, to lay their bets, wagering $2.5 billion dollars every year.

And there's no bigger bettor than Walters. But you'll never see him betting. He has anonymous partners in the sports books who bet for him and for themselves. They take their instructions from Walters.

He's holed up in his home office, with his phones and computers. On a Sunday morning in December, just an hour before the first NFL kick-off, he looks more like a stock broker than a gambler, checking the numbers and phoning his bet orders to his partners in the sports books.

"How much money did you just bet?" Logan asked.

"Yeah, and again, who knows? I would say that before the day's over, I'll probably end up with, I don't know, maybe $2 million at risk," he replied.

Over the years, people have spied on Walters and even rifled through his trash, trying to learn what teams he is betting on and how much he is betting. To protect his operation from prying eyes, Walters has become obsessed with security and secrecy. All of his partners use code names, like "J-Bird" and "Wolfman."

"Can you tell me who 'Wolfman' is?" Logan asked.

"He has a nickname, he prefers to be called 'Wolfman.' That's what I call him, 'Wolfman,'" Walters explained.

Walters has also built a brain trust of consultants, most of them mathematicians and experts on everything from weather conditions to player injuries. He told us they act like analysts for a hedge fund manager.

"So, information is key. I mean, it sounds like you track every single detail that could possibly affect the outcomes of these games and these teams," Logan remarked.

"Yes. It gets presented to me. I evaluate it. And I determine what I'm going to do," Walters said.

The information is so valuable that Walters keeps it all to himself. His consultants have all worked with him for 30 years but they've never met each other.

"They don't know each other," he explained. "They don't talk to each other. The only common denominator is me."

He is the only one who knows everybody.

"There's one of them you say is a savant. Why?" Logan asked.

"He can name every player on that team. He knew whether they were a freshman, a junior, a sophomore. He knew who the backup was. And this was strictly by recall. It was the most amazing thing I've ever seen. He would have an opinion on an outcome of a game. And he would be right many, many times," Walters said.

Being right on his football bets on the Sunday morning "60 Minutes" was there made Walters $300,000. Add in the Thursday night game and he netted close to a million dollars. In Walters hillbilly-speak, it was all "chicken." His bets on college basketball were less successful.

"I didn't fare too well with those games. Yesterday was a feather day as we refer to in our household. It was feathers yesterday. There was no chicken," Walters said.

"So you lost a lot of money?" Logan asked.

But he told Logan he's never had a losing year. And in sports betting, that is unprecedented.

"Is there anyone else like Billy Walters? Does anyone else do business the way he does in this town?" Logan asked Kenny White, one of the most respected oddsmakers in Las Vegas.

Asked what Walters' reputation is in Las Vegas, White said, "That he's a shark and a whale. He's a great white."

"What does it mean?" Logan asked.

"Oh, it means he's the most dangerous sports better in the history of Nevada, history of the world," White explained.

Asked why that is, White said, "That's the damage that he can do to a sports book."

All his winnings have made Walters a very rich man. He lives large, like a corporate titan. He and his wife Susan travel in a brand new jet worth $20 million that they use to travel to their seven homes.

Walters also gives millions to charities. He insisted on taking us to his favorite, "Opportunity Village," which trains intellectually handicapped people to perform jobs in Las Vegas. It's all close to his heart because he has a son with serious brain damage.

Walters was born dirt poor in the small town of Munfordville, Ky. He was raised by his grandmother. His mother had three kids by the time she was 17. Walters says she drank and wasn't around much. He was hanging out in pool halls, before most kids his age even knew what gambling was.

"I started shooting pool when I was five. When I was six I played a game of nine ball for a penny," Walters remembered.

"Were you any good at pool?" Logan asked.

"I got to be decent at pool, yes. By the time I was 13 I was a decent pool player. I was pretty decent," Walters replied.

Asked if he was making money, Walters said, "Yes. I probably had some situations where I won four or five thousand dollars or something. But not when I was 13. That didn't come along till I was like 15 or 16."

"Well, you're practically an old man at that point," Logan joked.

In 1980 Walters moved to Las Vegas after he was convicted of bookmaking in Kentucky. His new home became the casino, where he played poker and craps.

Walters told us he was broke more times than he can remember. But to Walters, the game was always more important than the money.

"Are you a hustler?" Logan asked.

"What's the definition of a hustler?" Walters asked.

"I take that as a yes," Logan replied.

"To me in life, you're either one of two: you're either a hustler or you're bein' hustled. And, you know, there's an old sayin' amongst gamblers: 'If you look around a room and you can't find the mark, you're the mark,'" he replied, laughing.

Walters joined a now infamous syndicate called the "Computer Group," which revolutionized sports betting in the 1980s by feeding data into computers. The group made so much money that authorities thought they were running an illegal bookmaking operation. Later, Walters was also accused of money laundering and having connections to the mob.

None of the charges stuck and Walters went on to build his own betting business. He became better than the bookmakers at predicting which team would win and by what margin. That margin of victory is called the "spread" or the "line."

"Now your lines are often different from the bookmakers' lines," Logan pointed out.

"What do you do in that situation?" Logan asked.

What's unique about Walters is that when he doesn't like the line, he can sometimes force the bookmakers to change it.

"We're gonna work on this a little bit. This number's gotten a little away from us," Walters observed, looking at data on a monitor.

In that instance, Walters thought the favorite was going to win, but he didn't like the line. So he bet on the underdog.

Bookmakers need the same amount of money on both sides of the game, so they respond to Walters' bet by lowering the line to attract more money on the favorite. That's when Walters springs into action and instructs his partners to simultaneously make an even bigger bet on the favorite.

Unlike some bookmakers, Lee Amaitis is not afraid to take Walters' bets in the sports book at the M Casino. He knows Walters is dangerous, but says it's an advantage to know what he's thinking.

"Billy sometimes bets on both sides to move the line. And he sometimes makes money that way," Logan said to Amaitis.

"I think he is one of the best at it," Amaitis replied. "He'll circle in on games that he knows the lines are soft. And he'll push that line to where he wants it to be, and then he'll take the other side of that."

"Does he have the power to move your lines?" Logan asked.

"Of course he does. He's Billy Walters. Of course he has the power to move our lines," Amaitis replied.

Walters has built an empire from his gambling. And at the age of 64, he isn't slowing down. He owns four golf courses, eight car dealerships and a ton of stock. But it was on Wall Street he says where he was taken for a ride.

His disdain for Wall Street is one of the reasons Walters decided to talk to "60 Minutes" - a chance he says to make the point that the gambling world is not as shady as most people think.

"I ran into a lotta bad guys, a lotta thieves. I mean, they'd steal the Lord's Supper. But I can tell ya, percentage-wise, I ran into many more with suits and ties on than I have with the gamblers," he told Logan.

"So you would say that the hustler from Vegas got hustled by Wall Street?" Logan asked.

"There's no doubt about it," Walters replied.