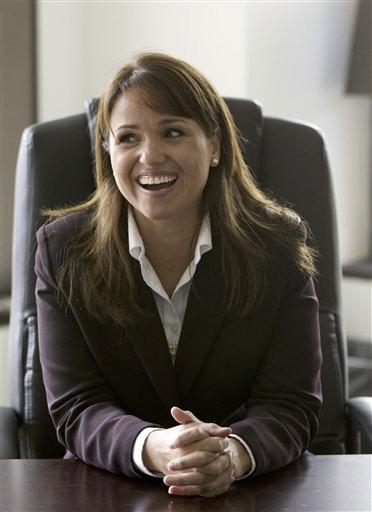 On what was to be her wedding day, Jennifer Wilbanks wore not a white veil but an orange towel over her head to prevent the media from taking her picture. Instead of being led down the aisle by her father, she was led by police to an airplane that flew the runaway bride home.

Now officials say the 32-year-old woman's cold feet may have gotten her in hot water. On Sunday, Gwinnett County District Attorney Danny Porter vowed to look into whether she violated the law by reporting a crime that didn't exist.

Wilbanks initially told authorities she was abducted while jogging but later disclosed she took a cross-country bus trip to Albuquerque, N.M., to avoid her lavish, 600-guest wedding.

"If there's criminal responsibility, that's something I have to do something about," Porter said, adding that no decision would be made Sunday. "I think it's really going to depend on the circumstances on how this was done."

Meanwhile Sunday, members of Peachtree Corners Baptist Church, where Mason is a member, said prayers and expressed concern for Wilbanks and her fiance, John Mason, who did not attend services Sunday morning.

The Rev. Bob Horner thanked church members who had helped in the search for Wilbanks and provided support for family members.

"Number one, we are so thankful that Jennifer has been found," Horner told the congregation. "Number two, I want to publicly thank all of you who prayed and you who went to Duluth to be with the family."

An FBI spokesman said Saturday that Wilbanks apparently made a sudden decision to flee her looming wedding and did not realize hundreds of people were looking for her. But he also noted she cut her hair to avoid being recognized.

Porter said he would speak on Monday to police in Albuquerque, where Wilbanks turned up late Friday and called her fiance and 911 to report that she had been kidnapped.

By all accounts, authorities in Albuquerque befriended the woman.

Wilbanks boarded her plane wearing a new FBI hat, blazer, polo shirt and pants and carrying a new tote bag and teddy bear, a gift from the aviation police chief. She flew first-class and said she planned to name the bear "Al," for Albuquerque.

But the Gwinnett County district attorney noted that vast law-enforcement resources were used to look for the missing bride.

After she disappeared last week without her keys, wallet or diamond ring, more than 100 officers led a search that involved several hundred volunteers, including many wedding guests and members of the bridal party.

In an area with one of the lowest crime rates in the state, the disappearance of Wilbanks was big local news, reports CBS News Correspondent Randall Pinkston.

Live trucks from Atlanta arrived within hours. Before long it was national news -- and reporters from the networks, cable stations and newspapers began arriving.

Porter said he had no jurisdiction over the woman's initial 911 call in Albuquerque, in which she told an operator she was kidnapped by a man and a woman in their 40s who were driving a blue van. Through sobs, she told the dispatcher they had a small handgun.

But Porter said Wilbanks could be charged for reporting her kidnapping story over the phone to Duluth Police Chief Randy Belcher.

Last year, a Wisconsin college student who faked her own abduction and turned up curled in a fetal position in a marsh was given three years' probation for obstructing police and was ordered to repay police at least $9,000 for their search.