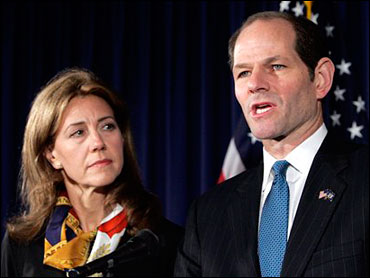 "I would say to [critics] that I never held myself out as being anything other than human," the former governor said in his first interview since resigning after a prostitution scandal. "I have flaws as we all do, arguably. I failed in a very important way in my personal life. And I have paid a price for that."

Spitzer, no longer a public servant, said he feels he still has an obligation to speak about troubling issues like the AIG bonus scandal. After he resigned, he was hired by Slate.com to write a regular column.

The former governor told CNN that AIG was at "the center of a web" of actions which instigated a major federal bank bailout. "Back then I said to people, 'AIG is the center of the web.' The financial tentacles of this company stretched to every major investment bank," he said, referring to his time at New York Attorney General. "Bonus is a real issue. It touches us viscerally," he explained.

Spritzer told Zakaria in the pre-taped interview, set to air Sunday, that there are many looming questions regarding the scandal.

"Why did that happen? What questions were asked? Why did we need to pay 100 cents on the dollar on those transactions if we had to pay anything?...What would have happened to the financial system had it not been paid?" he asked.