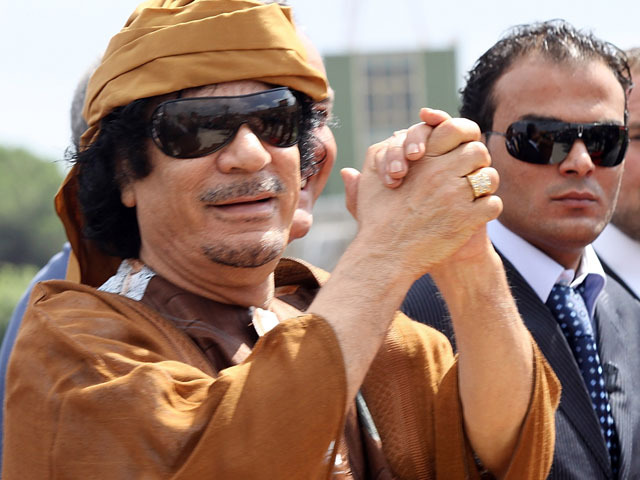 Joseph Nye of Harvard's Kennedy School wrote in The New Republic in 2007 that Muammar Qaddafi was interested in discussing "direct democracy."

Anthony Giddens of the London School of Economics wrote in the Guardian the same year that Libya under Qaddafi could become "the Norway of North Africa."

Benjamin Barber of Rutgers University wrote in the Washington Post, also in 2007, that Libya under Qaddafi could become "the first Arab state to transition peacefully and without overt Western intervention to a stable, non-autocratic government."

Great minds think alike? Actually, no: all were being paid by Libyan money, under a $3 million per year contract with a consulting group which promised to "enhance the profile of Libya and Muammar Qaddafi" in Britain and the US.

One more thing: none of them said in The New Republic, the Guardian, or the Washington Post that they were being paid by Libyan money. That seems to be a clear violation of journalistic ethics--at least that's what the then-editor of The New Republic, Franklin Foer, told David Corn of Mother Jones about Nye: "If we had known that he was consulting for a firm paid by the government, we wouldn't have run the piece."

Documentation about their employer, the Monitor Group, founded by Harvard faculty members, was obtained from a Libyan dissent group by David Corn and published at MotherJones.com. A 2006 letter from the CEO of Monitor, Mark Fuller, to an official in the Libyan government, published by Corn, declared, "Libya has suffered from a deficit of positive public relations and adequate contact with a wide range of opinion-leaders and contemporary thinkers. This program aims to redress the balance in Libya's favor."

Benjamin Barber, now Walt Whitman professor emeritus at Rutgers and a senior fellow at Demos, a pro-democracy think tank (and a longtime contributor to The Nation--see "America's Knowledge Deficit," Nov. 10, 2010), is the author of many books on democracy, most recently Consumed: How Markets Corrupt Children, Infantilize Adults, and Swallow Citizens Whole.

Barber's op-ed for the Washington Post was headlined "Gaddafi's Libya: An Ally for America?" In it he described his meetings with the dictator, who he called "surprisingly flexible and pragmatic." He said he was convinced Libya could become the first Arab state" with "direct democracy locally and efficient government centrally."

When I asked Barber about the Libyan funding for his article, he replied, "I didn't take money from Qaddafi. The money to Monitor was coming from the Qaddafi Foundation, funded by Saif [Qaddafi's son], who was providing the impetus for reform." But this turns out not to be true. Nothing in the Monitor documents that have been released mention the foundation. The Monitor documents David Corn obtained are all about PR for Qaddafi. And the Guardian obtained other documents showing that Monitor's PR deal with Libya was submitted to the head of military intelligence for Qaddafi, Abd Allah al-Sanusi--he has been held responsible for atrocities in the present uprising.

Defending his acceptance of Libyan money, Barber also said, "Everyone gets paid. Consultants get paid, and I was paid by Monitor. I've been paid by lots of different people--the Department of Education, the state of New Jersey."

But wait a minute--isn't there a difference between working for the State of New Jersey and working for the state of Libya, to burnish its image in the eyes of Americans?

Barber went on to say, "The pay isn't the issue. The issue is what I was doing there: working to build democratic capacity."

In fact, the issue is not what Barber told Libyans about democracy, but rather what he told Americans about Qaddafi

Barber also pointed out that the US was courting Qaddafi at the time, seeking his help in fighting Al Qaeda and opening Libya to American oil companies. "Nobody criticized Condi Rice for shaking hands with Qaddafi," Barber told me. "But when somebody goes in saying 'maybe we can create some democratic capacity,' they say we were duped in a PR scheme to burnish the image of a dictator. I just don't get it."

But It's not that hard to understand: people expect intellectual integrity from Ben Barber, and Tony Giddens and Joe Nye. They expect something different from Condi Rice--diplomatic double-speak in the pursuit of American strategic and corporate interests as defined by George Bush. So we don't accuse her of hypocrisy--and we don't think she was duped.

As for Nye, the Sultan of Oman Professor of International Relations at Harvard, he replied to my questions in an e-mail, in which he said he himself had "initiated" his article in The New Republic, rather than Monitor, because "I thought my impressions were worth reporting." He added, "At no time have I supported the Qaddafi regime, and I am on record as hoping for their swift overthrow."

Giddens, formerly head of the London School of Economics and now a member of the House of Lords, has not responded to requests from Mother Jones or the Guardian for comment.

Bio: Jonathan M. Wiener is an American professor of history at the University of California Irvine, a contributing editor to The Nation magazine, and a Los Angeles radio host.

My Country Or My Friend?