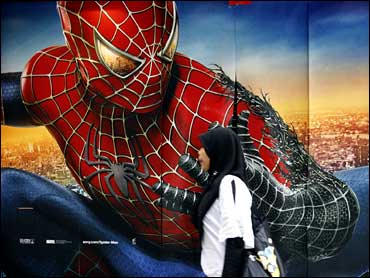 Even when he takes a huge fall, Spider-Man comes out on top.

Sony's "Spider-Man 3" took in $60 million in its second weekend, a hefty 60 percent drop from its record debut a week earlier but good enough to easily outdistance the competition and remain the No. 1 movie, according to studio estimates Sunday.

"After a record-breaking opening weekend, to me this is an appropriate second-weekend drop," said Paul Dergarabedian, president of box-office tracker Media By Numbers. "Any studio would be happy to have a movie opening with $60 million, let alone a second weekend with $60 million."

"Spider-Man 3" quickly became the year's top-grossing film, hurtling past "300," the Warner Bros. battle epic that has taken in $208 million.

Second-weekend drops for successful studio films typically are well below 50 percent. But "Spider-Man 3" shattered records with $151.1 million in its first weekend, making a big decline virtually inevitable since so many people already had seen the film.

"When you're in that stratosphere, we had to assume we would be in the range of a 60 percent drop," said Rory Bruer, head of distribution for Sony.

The weekend's other new movies had fair to poor openings.

Debuting in second place with $10 million was Fox Atomic's horror sequel "28 Weeks Later," a follow up to "28 Days Later" that continues the story of a virus in Britain that turns people into raging, cannibalistic zombies.

Universal's "Georgia Rule," starring Lindsay Lohan, Jane Fonda and Felicity Huffman, opened at No. 3 with $5.9 million. Lohan plays a rebellious teen who's put under the charge of her no-nonsense grandma (Fonda).

Lionsgate's "Delta Farce" premiered at No. 5 with $3.5 million. Larry the Cable Guy stars in the comedy about three weekend warriors mistakenly dumped in Mexico, where they take on a gang of bandits.

The Weinstein Co. and MGM's workplace comedy "The Ex" tanked with $1.4 million, coming in at No. 12. The movie stars Zach Braff as a husband dueling with a co-worker who also is his wife's ex-boyfriend.

Overseas, "Spider-Man 3" pulled in an additional $85.5 million for the weekend, raising its international total to $380 million and worldwide total to $622 million. The previous "Spider-Man" movies each took in about $800 million worldwide, a number "Spider-Man 3" should easily beat.

"Spider-Man 3" has a shot at topping $1 billion worldwide, Bruer said. Only three other movies, "Titanic," "The Lord of the Rings: The Return of the King" and "Pirates of the Caribbean: Dead Man's Chest," have hit that mark.

After two weekends of light competition, "Spider-Man 3" faces the summer's next heavy-hitter Friday with the debut of DreamWorks Animation's "Shrek the Third," the latest adventure of the cartoon ogre.

A week later, Disney's "Pirates of the Caribbean: At World's End" sails into theaters, the Johnny Depp action comedy joining "Spider-Man 3" and "Shrek the Third" to set up what could be Hollywood's biggest Memorial Day weekend ever.