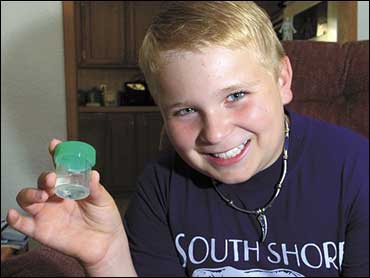 These guys were not exactly Snap, Crackle and Pop.

What began as a faint popping in a 9-year-old boy's ear — "like Rice Krispies" — ended up as an earache, and the doctor's diagnosis was that a pair of spiders made a home in the ear.

"They were walking on my eardrums," Jesse Courtney said.

One of the spiders was still alive after the doctor flushed the fourth-grader's left ear canal. His mother, Diane Courtney, said her son insisted he kept hearing a faint popping in his ear — "like Rice Krispies."

Dr. David Irvine said it looked like the boy had something in his ear when he examined him.

When he irrigated the ear, the first spider came out, dead. The other spider took a second dousing before it emerged, still alive. Both were about the size of a pencil eraser.