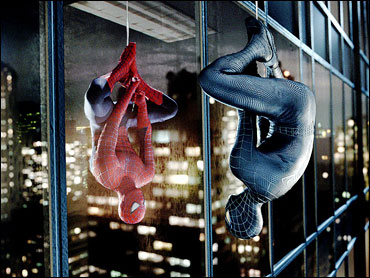 Spider-Man caught just about everyone in his web. The superhero's latest adventure, "Spider-Man 3," smashed box-office records with $148 million in its first three days, according to studio estimates Sunday.

That put it ahead of the previous record debut of $135.6 million set last summer by "Pirates of the Caribbean: Dead Man's Chest."

Since it began rolling out overseas on Tuesday, "Spider-Man 3" has taken in $227 million in foreign markets, bringing the film's worldwide total to $375 million. In just days, the movie has grossed $117 million more than its whopping $258 million production budget.

In just two days, it also nearly matched the $114.8 million opening weekend of 2002's "Spider-Man," which had held the debut record until "Dead Man's Chest" opened.

"Sam Raimi is a genius," said Amy Pascal, Sony Pictures co-chairman. "I could have never envisioned this. What I was hoping was we would just break the `Spider-Man 1' record. This is beyond my wildest dream."

The overall box office soared from "Spider-Man 3," with the top-12 movies taking in $176.6 million, up 77 percent from the same weekend a year ago, when "Mission: Impossible III" opened with $47.7 million.

"Spider-Man 3" outdid that movie by $100 million and grossed more in each of its first two days than "Mission: Impossible III" did over the full weekend.

Also among the records smashed by "Spider-Man 3" was a $4.8 million domestic gross at huge-screen IMAX theaters, topping the previous best of $3.6 million set by "300" in March.

Domestically, "Spider-Man 3" could enter its second weekend Friday with $200 million already in the bank. The film has the market largely to itself for the next week and a half, with no major competition arriving until DreamWorks Animation's "Shrek the Third" arrives May 18.

With "Pirates of the Caribbean: At World's End" and an onslaught of other potential blockbusters following, studio executives predict this could be a record summer for modern Hollywood.

"Spider-Man 3" packed in enormous crowds that were captive audiences viewing trailers for those upcoming flicks.

"If you could imagine the best kickoff to what could be the biggest summer of all time, this is the scenario," said Paul Dergarabedian, president of box-office tracker Media By Numbers. "This will have a ripple effect on audiences exposed to the marketing for all the other summer films."

The gap between "Spider-Man 3" and the No. 2 movie — DreamWorks and Paramount's "Disturbia" at $5.7 million — was larger than any other movie's debut. "Disturbia," which had been No. 1 for three-straight weekends, raised its total to $59.9 million.

The weekend's only other new wide release, the romantic drama "Lucky You" from Warner Bros., bombed with $2.5 million to come in at No. 6.

Directed by Curtis Hanson ("L.A. Confidential"), "Lucky You" stars Drew Barrymore as a budding Las Vegas singer, Eric Bana as skilled gambler and Robert Duvall as his estranged father in a tale set against the World Series of Poker.

Fox Searchlight's "Waitress," starring Keri Russell as a small-town woman whose flavorful pies are named after the hard knocks in her messy personal life, debuted with $91,470 in four theaters. "Waitress" was written and directed by co-star Adrienne Shelly, who was slain in her Manhattan apartment last fall.

Lionsgate's "Away From Her," the directing debut of actress Sarah Polley, premiered with $56,000 in four theaters. "Away From Her" stars Julie Christie as a woman losing her memory from Alzheimer's and Gordon Pinsent as the devoted husband agonizing over her loss.

Both films expand to more theaters throughout May.