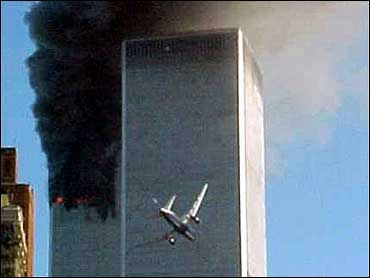 Researchers believe the second hijacked plane to hit the World Trade Center was traveling about 100 mph faster than the first, according to a published report.

Investigators are focusing on the speed of the two planes as they seek to explain what caused the south tower to collapse first, even though it was the second one hit, The New York Times reported Saturday.

Researchers have closely studied videos, sound recordings and radar to estimate how fast the two jetliners were moving. Studies show that both planes were traveling well over the federal limits for altitudes below 10,000 feet, The Times said.

The second plane was flying so fast that it was in danger of breaking up in the air as it approached the south tower, Boeing spokeswoman Liz Verdier told the Times.

"These guys exceeded even the emergency dive speed," Verdier said. "It's off the chart."

Two studies have analyzed the speed of the planes, one by the Federal Aviation Administration in consultation with the National Transportation Safety Board and the other by Eduardo Kausel, a professor of civil and environmental engineering at Massachusetts Institute of Technology.

The south tower collapsed 56 minutes after the crash. The north tower stood for 102 minutes.

Structural engineers have not determined to what extent the speed of the planes affected how long the buildings stood. They are studying many factors, including the point at which each tower was hit.

The effort to better understand the events of the day isn't being made easier by the fact that the voice and data recorders aboard the two hijacked jetliners that hit the twin towers haven't been recovered.

The four devices - and all the clues they would hold - have failed to turn up in the 1.25 million tons of steel, concrete and other material taken from ground zero.

"It's extremely rare that we don't get the recorders back. I can't recall another domestic case in which we did not recover the recorders," said Ted Lopatkiewicz, spokesman for the National Transportation Safety Board.

Engineers studying how the towers collapsed culd also draw crucial information from the data recorders, which show the plane's speed and altitude.

The size of a shoe box and painted bright orange, the recorders are built to withstand fire, water and blunt-force impact, and are located in the tail for maximum protection.

But the attacks were an unprecedented survival test for the misnamed "black boxes." The two wide-bodied jets, carrying a total of 157 people including 10 hijackers, were mostly destroyed by the fires and collapsing towers.

"So little (airplane) debris has been recovered that there's really no way to quantify it," FBI spokesman Joseph Valiquette said. The only pieces on display at the landfill were a piece of United 175's fuselage and several pieces of landing gear.

"Of course we know what happened on Sept. 11, but it goes beyond that," Valiquette said. "We don't know what was said in the cockpits, by the crew members or by the hijackers. Is there language implicating other individuals who might have been involved? Is al-Qaida mentioned? Is there idle chatter about other plans for that day or subsequently?"

The four recorders from the other two hijacked planes - American Airlines Flight 77, which was flown into the Pentagon, and United Flight 93, which crashed near Somerset, Pa. - were recovered within days.

FBI Director Robert Mueller said Flight 77's data recorder provided altitude, speed, headings and other information, but the voice recorder contained nothing useful. He declined to say what was gleaned from recorders on Flight 93, whose passengers evidently fought the hijackers before the Boeing 757 went down in a field, killing all aboard.

The trade center data recorders would fill in information lost to controllers when the two planes' transponders, which provide real-time speed and altitude, were turned off.

2 monkeys missing from Dallas Zoo have been found, police say
Thanks for reading CBS NEWS.
Create your free account or log in
for more features.
View CBS News In
CBS News App Open
Chrome Safari Continue
Be the first to know
Get browser notifications for breaking news, live events, and exclusive reporting.