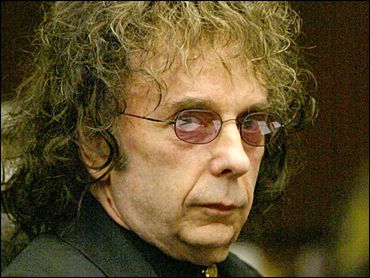 The report stated that Lana Clarkson had gunshot residue on both of her hands and was shot with a gun inside her mouth. It still concludes, however, that Clarkson's death was a homicide.

Clarkson, it said, showed no signs of being suicidal and there was no suicide note.

"I'm saying that the evidence that the coroner had is consistent with the self-inflicted gunshot wound," Spector's attorney Marcia Morrissey said.

The forensic analysis report, prepared four days after the Feb. 3, 2003, shooting, had been on a "security hold" at the Los Angeles County Coroner's office until it was released Thursday to The Associated Press.

"There is certainly no justice in maintaining this secrecy in the light of Mr. Spector's being charged with murder," defense attorneys Leslie Abramson and Marcia Morrissey in a letter explaining their decision to release the report. The coroner had refused media requests to see the report.

Spector, who was arrested immediately after the death but not charged until November, is free on $1 million bail. Lawyers were due in court Friday afternoon to discuss his upcoming court schedule.

The autopsy report also shows the .38-caliber revolver had one spent round and five live rounds in the cylinder, so only one shot was fired, reports Juan Rodriguez of KCBS-TV.

Prosecutors did not dispute the official results but indicated they would challenge the suggestion that Clarkson pulled the trigger herself.

"Analysis revealed several highly specific particles and many consistent particles of gunshot residue on both the right and left hand," the report said. "Therefore, the decedent may have discharged a firearm or had (her) hands otherwise in an environment of gunshot residue."

Autopsy drawings show that Clarkson had a broken acrylic fingernail on her right thumb, which defense attorneys are expected to argue came from firing the gun.

A gunshot releases a cloud of residue within a three-foot radius, said Sandi Gibbons, spokeswoman for the district attorney.

"She could have had her hands on her lap when the gunshot went off and residue would have still been on her hands. There was residue on Spector's hands. He also had blood on his hands," Gibbons said.

"The theory cannot be that Philip Spector somehow was able to walk up to this woman, put a gun inside her mouth, and shoot the gun without any defensive measures from Ms. Clarkson," countered Morrisey.

Abramson and Morrissey declined to release a report on gunshot residue tests done on Spector the night of his arrest.

DNA analysis of blood found on the exterior of the gun and inside the barrel matched Clarkson's DNA, the report showed.

Prosecutors believe that Spector wiped the gun clean before it was placed on the floor near her ankle, Gibbons said.

The coroner's conclusions, based on law enforcement reports, said Clarkson's "male companion" had possession of the gun when it was discharged.

Other documents in the thick coroner's file showed Clarkson had alcohol and the painkiller Vicodin in her system when she died. She was found slumped in a chair in the foyer of Spector's mansion.