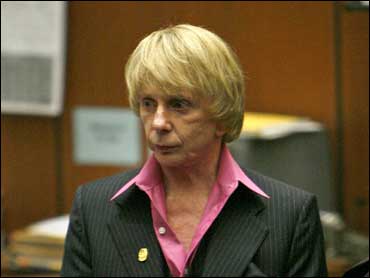 Phil Spector, now on trial for murder, asserted in a 2005 home video interview that the statuesque Lana Clarkson was standing when a gun was fired in her mouth and that he is too short to have done it.

The video, broadcast Wednesday by the TV program "Inside Edition," also showed Spector offering $100,000 to unnamed women to take a lie detector test to prove their claims that Spector threatened them with guns.

"The deceased, who was standing when she took her own life and she was 5-11 and she would have been 6 feet 2 with heels on, which she was wearing at the time of her death, and that the gun was in a downward position," said Spector, wearing a Hawaiian shirt and shell necklace as he spoke from a chair in his Alhambra mansion.

"I am 5 foot 5. It would have been physically impossible for me to have administered the death wound to her in any shape, way or form," he said in rambling, run-on statements.

"Inside Edition" said the home video interview was done and provided to the show by his then-assistant Michelle Blaine, who told the program Spector recorded it to tell his side of the story. Spector also taped a version wearing a suit and tie.

Spector, 67, is accused of murdering Clarkson around 5 a.m. Feb. 3, 2003, after she went home with him from the House of Blues, where the actress was working as a hostess in a VIP room.

The defense claims Clarkson killed herself, which Spector suggested in the tape.

The record producer also stated that he did not have sex with "the deceased" and knew her for only 10 minutes before she drove home with him.

The record producer also anticipated the recent testimony of four women who gave accounts of being threatened by a gun-wielding Spector in incidents going back years.

Offering them the lie-detector deal, he waved a signed check in front of the camera and said, "Well here's a chance to make money."