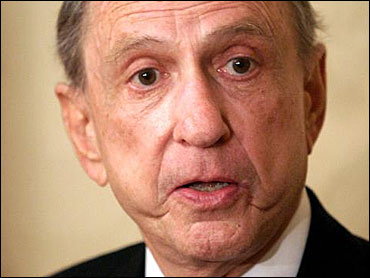 "It is neither pleasant nor easy to raise these issues with the administration of my own party, but I do so because of their importance," the Pennsylvania Republican wrote Cheney in a three-page letter Tuesday.

Specter complained that Cheney was lobbying other GOP Judiciary Committee members to oppose efforts to subpoena phone company executives. Specter wants to find out what they did to aid the National Security Agency's controversial surveillance work.

Specter said he was surprised that Cheney "sought to influence, really determine," the committee's actions without even calling first.

"This was especially perplexing since we both attended the Republican senators caucus lunch yesterday," Specter wrote, "and I walked directly in front of you on at least two occasions en route from the buffet to my table."

Specter is the most vocal Republican to oppose the White House's directive that allows the NSA to monitor the calls and e-mails of Americans without court approval. Bush administration officials have said the program requires that one party to the communication must be overseas, and terrorism must be suspected.

Specter wants legislation to compel a secretive federal court to examine the constitutionality of the program, and he has expressed displeasure that the White House won't give him any feedback on his bill.

"Notwithstanding my repeated efforts to get the administration's position on this legislation, I have been unable to get a response, including a 'no,"' Specter said to Cheney.

Specter said he wants to work with the White House on a number of issues dealing with the expansion of presidential power. Among them: