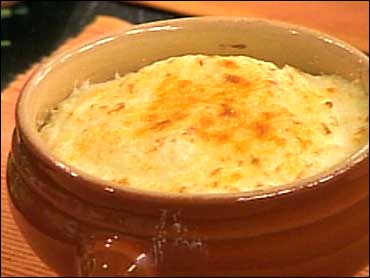 Turkey may be the main event on Thanksgiving, but side dishes are just as important.

On "The Early Show" Thursday, Tom Valenti, owner and executive chef of New York's Ouest restaurant, prepared some tasty sides using some of his expert tricks and tips to make your sides stress-free this holiday.

Sides, he says, can be very easy. Soups can be made ahead of time. In fact, the longer a soup sits, the more the flavors marry. Reheating soup is all you need to do on Thanksgiving Day. The below stuffing recipe can be prepped the day ahead (bake the bread, cook the sausage and veggies), by prepping the ingredients in separate plastic bags and measuring cups. Then all you need do on the day of is combine and bake. The last thing you want is for your meal to time out badly due to lack of oven space or the amount of chopping and measuring you have to do. Making your sides simple can take all the pressure out of the day.

Potatoes can be tricky. If they are totally prepped ahead of time and reheated in the microwave or oven, they could dry out. But we have a simple solution for that, too. Use a double boiler. Fill the bottom pan about half way with water, place the pre-made potatoes in the upper pan and place the double boiler over lower heat.

Check out the full recipes for more of Valenti's advice:

Directions
1.Preheat the oven to 350°. Butter two 9-by-13-inch baking dishes. Spread the bread on 2 large rimmed baking sheets and bake for 20 minutes, stirring a few times, until crisp; let cool. Transfer to a very large mixing bowl. Meanwhile, spread the pine nuts on a baking sheet and bake for about 5 minutes, until golden brown. Increase the oven temperature to 400°.

3. Add the 4 tablespoons of solid butter to the fat in the skillet and heat. Add the celery and onions, season lightly with salt and pepper and cook over moderately high heat, stirring, until the onions start to soften, about 5 minutes. Reduce the heat to low and cook, stirring occasionally, until the celery and onions are completely softened, about 20 minutes. Add the wine and simmer over high heat until reduced by three-fourths, about 4 minutes. Let the mixture cool to room temperature.

4. Add the vegetable mixture and the pine nuts to the bread cubes and sausage and toss. Add the oysters and their liquor, the thyme and marjoram and enough stock so that the bread is very moist but not overly soggy; season the stuffing with salt and pepper. Transfer the stuffing to the prepared baking dishes. Brush the tops of the stuffing with the melted butter.

5. Bake the stuffing in the upper third of the oven for about 15 minutes, or until hot. Preheat the broiler. Broil the stuffing 6 inches from the heat for about 2 minutes, rotating the baking dishes as needed, until nicely browned on top. Serve right away.

For more Thanksgiving side dishes, go to Page 2.

Potato Puree
For Tom, the most important thing is to use cold cubed butter and HOT milk for the best possible emulsion. The key is to dice the butter as fine as possible so that you don't have to overwork the potatoes to distribute the ingredients.

2 pounds of peeled Idaho Potatoes, Cut into 1 inch cubes
Coarse Salt
1 cup of hot milk or more to taste
8 tablespoons or 1 stick of cold unsalted butter, or more to taste cut into a small dice

Preheat the oven to 250 degrees.

Place the potatoes in a pot and cover with cold water. Season liberally with salt. Set over high heat, bring to a boil and lower the heat slightly to maintain a strong and steady simmer. Cook until tender but not breaking apart, 12 to 15 minutes. Drain the potatoes very well in a colander and transfer to a cookie sheet.

Using a ricer or potato masher, puree the potatoes to a thick paste, taking care not to overwork them.

Potatoes can be made ahead of time. To reheat place the potatoes in the upper pot of a double boiler. Put water in the lower pot, put the top pot on the bottom pot and gently reheat. They can be kept on very low heat this way for up to 2 hours.

Preheat the oven to 400°. Halve the squash lengthwise and scoop out the seeds. Set the squash on a rimmed baking sheet, cut sides up. Put a piece of butter in each cavity and season generously with salt and pepper lay 1 or 2 strips of bacon lenghtwise alongside each half Roast the squash for 35 to 45 minutes, or until tender.

Transfer the bacon to paper towels to drain. Crumble and set aside. Scoop the squash out of the skins into a bowl.

In a large, heavy stockpot, heat the 2 tablespoons of olive oil until shimmering. Add the onion, season with salt and pepper and cook over moderately high heat, stirring, until softened but not browned, about 6 minutes. Add of the thyme sprigs and the bay leaf. Stir in the squash and the stock and bring to a boil over high heat, stirring frequently. Reduce the heat and simmer the soup for 15 minutes, stirring occasionally.

Pick out and discard the thyme sprigs and bay leaf. Working in batches, transfer the soup to a blender or food processor and puree until thick and creamy-smooth, about 1 minute per batch. Transfer the soup to a clean saucepan. Stir in the heavy cream and season with salt and pepper (and sugar if desired).

Reheat the soup if necessary. Ladle into 12 bowls. Garnish the soup with the bacon and a drizzle of olive oil.

Brussels Sprouts with Onion and Bacon

1. In a large, deep skillet, cook the bacon over moderately high heat until browned, about 8 minutes. Add the onion and garlic, reduce the heat to moderate and cook, stirring, until softened, about 5 minutes. Add the stock, season with salt and pepper and a pinch of sugar and cook until the liquid has reduced to 1 cup, about 12 minutes.

2. Meanwhile, in a large pot of boiling salted water, blanch the brussels sprouts until barely tender, about 3 minutes.

3. Add the sprouts to the skillet. Simmer gently over moderate heat, stirring occasionally, until tender throughout, about 10 minutes; season with salt and pepper. Using a slotted spoon, transfer to a bowl. Boil the liquid in the skillet over moderately high heat until reduced to 1/2 cup. Pour the sauce over the brussels sprouts and serve.