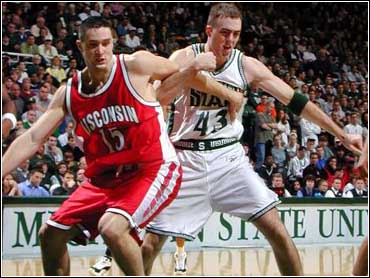 Mateen Cleaves, a two-time All-American, had a will to win. That made all the difference.

Cleaves scored five of his 12 points down the stretch and a struggling Michigan State held on to beat Wisconsin 59-54 on Saturday.

The sixth-ranked Spartans were outrebounded for the first time all season, yet the win allowed them to remain alone in first place in the Big Ten.

"Mateen had a will to win tonight that was separate from all the other players," coach Tom Izzo said. "We would not have won without that."

This was the 13th game and 11th start for Cleaves, who missed the first half of the season while recovering from a broken right foot. Since returning to the lineup, he is averaging 11.5 points and 7.7 assists.

"He looked like the Mateen of old tonight, and I'm glad to see it," Izzo said. "I told him so, too."

Morris Peterson and Charlie Bell each scored 15 points as the cold-shooting Spartans (20-6, 10-2) rang up their 26th straight win at Breslin Center. But it was Cleaves to took over the game in the final minutes.

Even when he was missing shots or making a mistake, the game clearly was in his hands to win or lose.

A 3-pointer by Cleaves gave the Spartans a 53-44 lead matching their largest of the game with 5:38 remaining. His two free throws with 4.1 seconds left iced it for the Spartans, who now have put together three straight 20-win seasons for the first time in school history.

"He's starting to get his quickness back," Bell said. "Everybody just feeds off Mateen when he gets going, especially late in a tight ballgame. That's the way you want if to be with the leader of your team."

"We had too many turnovers," Wisconsin coach Dick Bennett said. "That was the difference.

"But, a lot of those were due to hustle. Given a choice, I would take the hustle on the glass and live with turnovers any day."

A three-point play by Kowske gave Wisconsin its first lead, 32-31, on the first score of the second half. It was the first of six lead changes in the half.

The Spartans went 4:39 between a jumper by Jason Richardson and Bell's layup with 9:40 remaining, but four free throws helped Michigan State build a 47-41 lead despite the shooting slump.

The Badgers weren't shooting much better. They made just two field goals over a 10-minute stretch after Jon Bryant's 3-pointer tied it at 39 with 14:30 left.

Richardson's jumper with 14:21 left gave the Spartans the lead, 41-39, which they managed to hold the rest of the way.

"When you play Wisconsin, you know you're going to get a slap in the face," Cleaves said. "They show you what you need to work on."

This was the second meeting in eight days between these teams. The Spartans beat Wisconsin 61-44 on Feb. 12 in Madison. But this clearly was a new day.

"I think we were embarrassed last week at home, and we were determined not to be outfought," Bennett said. "So, we brought a bit more intensity to the floor, especially on the glass. That was important."

The Badgers hit 12 3-pointers and tied an NCAA record by hitting 11 straight treys in a 75-59 win over Michigan on Wednesday, and it was their best weapon in this game, too. Wisconsin sank five 3s in the first half and seven for the game.