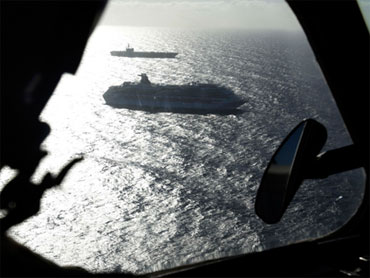 The food on the disabled cruise ship Carnival Splendor is cold and the lines to get it stretch for hours.

And with the pool and casinos closed and rooms pitch black and stuffy, the nearly 4,500 people and crew on board passed the time with live music, scavenger hunts and trivia contests as they are slowly towed to San Diego.

The bar is also open and offering free drinks.

Two tugboats were pulling the 952-foot ship back to the U.S. The journey could take at least until late Thursday.

The ship entered cell phone range on Wednesday and the crew set up a bank of eight Satellite phones, allowing passengers mostly cut off from communication since an engine fire disabled the vessel on Monday to finally reach loved ones — and provide the first details of the conditions on board.

Among them was David Zambrano, who phoned his employer, Denver TV station 9NEWS, and said people were trying to keep their spirits up by singing, socializing and playing cards.

Rooms in the interior of the ship were dark, and passengers propped open their doors to let in air and emergency lighting from the hallways, Zambrano said.

"So really, all we're doing is just kind of hanging out on a boat waiting for the next mealtime," Zambrano said.

With no refrigeration on board, the ship ran out of food Tuesday, forcing passengers to trade elaborate dinners for relief supplies that are a little more basic, CBS News correspondent Priya David reports.

Mealtime requires a two-hour wait for cold food, he said. Navy helicopters flew in Spam, Pop Tarts and canned crab meat and other goods for the passengers and crew.

"It's almost like a diet cruise because we've been eating salads and fruit and small sandwiches," Zambrano said.

Carnival CEO Gerry Cahill said the challenges on the cruise ship are unlike any others his company has faced in its 35-year history.

"The conditions on the ship have been challenging and we are very, very sorry for the discomfort and the inconvenience that our guests have had to deal with in the past several days," Cahill said at a news conference in San Diego. "They signed up for a great cruise vacation and obviously that is not what they received."

Gina Calzada, 43, of Henderson, Nev., said her diabetic sister, Vicky, called her Wednesday morning on her cell phone and started sobbing. She said she has not been able to take her insulin for her diabetes because she is not eating enough.

She told Calzada all that she had eaten was some bread, cucumbers and lettuce. "I told her where are the Pop Tarts and the Spam? I thought they brought in 70,000 pounds of supplies," Calzada said. "She said I haven't seen that."

Alvarez and her husband saved up for months to take the cruise to celebrate their wedding anniversary of more than 20 years and her 48th birthday, which was on Nov. 4. They had not been able to take a vacation for years because Alvarez was caring for their aging mother, who died in June.

"She said it stinks of rotten food and smoke," Calzada said. "It's dark, and it's cold."'

Her sister then passed the phone to her husband because she was crying too hard, Calzada said. He told Calzada that when he went looking for food for his wife, a crew member told him to give her a Tic-Tac.

"That really made my brother-in-law upset," Calzada said.

Cahill said he did not have information about Alvarez to immediately comment.

Passengers were being entertained with bands and board games, and were being offered free drinks at the bar and the option of sleeping out on the deck, he said.

The Splendor left Long Beach on Sunday for a seven-day trip to the Mexican Riviera. The ship was 200 miles south of San Diego and about 44 miles off shore when the engine room fire killed its power.

No one was hurt, but those on board were left without air conditioning, hot water or Internet service. Most telephone service had been knocked out. The ship's auxiliary power allowed for working toilets and cold water, Carnival spokesman Vance Gulliksen said.

Dawn Gill said her son Daniel Gill board the ship with his wife, Kendall, and the Pheonix couple had been celebrating their honeymoon.

"Once we knew there were no injuries, and there's no pirates or terrorist attack, and there's no imminent danger kind of thing, it's just inconvenience," said Dawn Gill. "We're laughing it's like, it had to be Dan and Kendall's wedding, it just had to be, and it's going to be great conversation at Thanksgiving when the family gets together. Just what a great way to start out, it's got to go up from here."

The U.S. Navy resupplied the ship on Tuesday with thousands of pounds of food and other supplies ferried by helicopter from the USS Ronald Reagan, an aircraft carrier diverted from maneuvers nearby.

On Wednesday morning, it was 125 miles south of San Diego and was expected to arrive Thursday afternoon or evening if the weather remained good, U.S. Coast Guard Lt. Cmdr. Rick Foster said. No storms were forecast.

The journey hit more glitches when a second tugboat sent to help the first was forced to turn back because it wasn't powerful enough, and a third was hooked up Wednesday morning and pulling with no problem, Coast Guard officials said.

Carnival first planned to haul the ship to the Mexican port of Ensenada, not far from a movie studio complex used to film "Titanic," and bus passengers to the U.S.

But the cruise line decided they would be more comfortable on board, Gulliksen said.

Zambrano said passengers were overjoyed to hear they were heading straight back to California and wouldn't have to go through the tedious customs process at the border.

"When they said they were towing us to San Diego instead of Ensenada, the cheer could be heard all the way around the boat," he said. "Everybody was screaming.

And each time a rescue boat arrived, he said, people ran to the side, cheered, waved and took pictures.