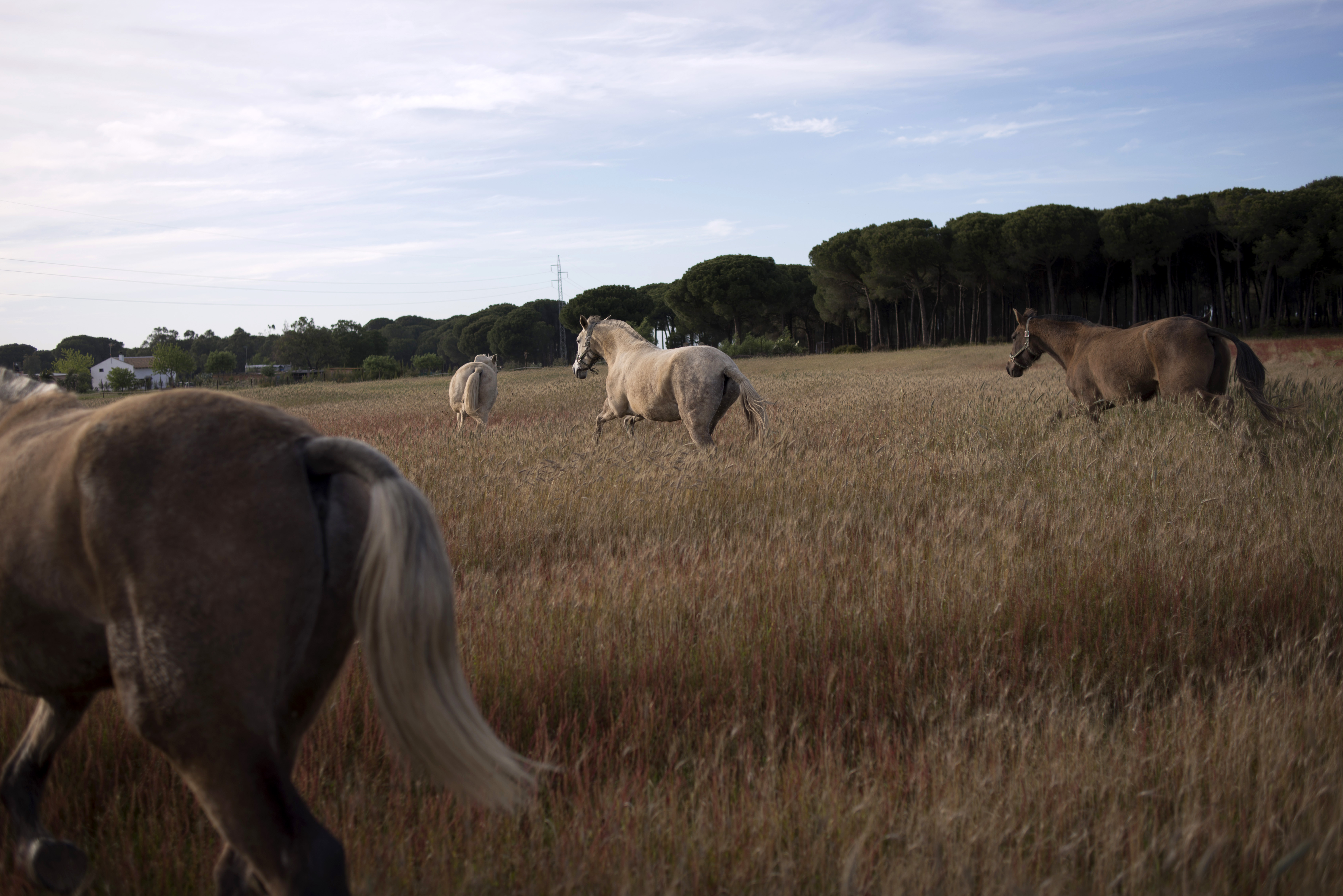 ALMONTE, Spain The southern Spanish region of Andalusia, famed for flamenco and Moorish castles, is also home to a legendary breed of horses that carried conquistadors into battle in the Americas, featured in Hollywood epics and more recently became trophy acquisitions for Spaniards during a giddy economic boom.

On his grassy ranch in the territory's heartland, 73-year-old Francisco Mesa breeds these `'Pura Raza Espanola" — Pure Spanish Breed — horses with a passion that comes from years of pampering the elegant beasts known for their intelligence and affection for humans. He enters a muddy pen and is immediately surrounded by mares and foals who nuzzle him with tenderness, oblivious of their almost certain fate: the slaughterhouse.

Barring an unlikely reprieve, Mesa's purebreds will be turned into horse meat for export come July. They are victims of a wrenching economic downturn that has wiped out fortunes, turned housing developments into ghost towns and left more than a quarter of the population out of work.

The Pura Raza Espanola breed has always been popular in Spain but took off just after the start of the country's biggest ever economic boom in the late 1990s. They had already won fame as war horses and gifts exchanged between European nobility, and have been featured in Hollywood films such as "Gladiator" and "Braveheart." The spike in demand over the last decade triggered a breeding frenzy in which the number of horses in Spain rose by the hundreds of thousands, nearly half of them purebreds like Pura Raza Espanola. Spain's newly minted affluent classes couldn't get enough of them.

Then came the bust of Spain's property bubble in 2008. First demand for the horses dried up. Now, as the financial crisis deepens with no end in sight, there's a new dilemma: Horse owners are increasingly unable to pay for the animals' upkeep. It all means that they face slaughter if owners can't find anybody to take the animals off their hands. Until last year, Spanish law even dictated that rejected horses must be sent to the slaughterhouse. That's no longer the case but most still are turned into meat because there's little alternative if nobody else is willing to take the horses in. Owners who simply abandon horses face steep fines.

The number of horses sent to slaughter in Spain by owners and breeders hit 70,000 last year, more than double the 30,000 recorded killed by the country's Agriculture Ministry in 2008.

Mesa grew up on a farm where horses were the machinery before the machines came in, and has been in the breeding business since 1991. He used to sell his purebreds for tens of thousands of euros each, and is now desperately trying to unload his 25 horses cheap or give them away to save their lives. He is horrified at the strong prospect of them being turned into meat that few Spaniards eat, but is exported to other European countries — especially France and Italy.

In these lean times, Mesa says he can't justify spending any more of his monthly government pension, supplemented by rent his son gets from another farm, to pay the cost of the horses' upkeep. So he has set a June deadline for finding a new owner for his horses. If he can't, this is what happens: A buyer who sells horses to the slaughterhouses pays about 150 euros ($200) per animal, and sends a truck to pick them up. The horses then remain in a corral until the local slaughterhouse gets through its waiting list of horses slated for butchery.

"We want them to stay alive and we are trying to see if we can get something back of what we have spent on them," Mesa said. "And if not I fear as a last resort, with all the pain in my heart, we will have to send them to the slaughterhouse. But I am begging for help. I don't want to make any money out of this."

Mesa doesn't believe the market for prize horses that Spain enjoyed for years will come back in his lifetime. It's a view that animal breeding experts and government officials agree with.

"Horses were a status symbol and lots of people bought them, learned to ride, and the horse breeders prospered" said Carlos Buxade, an animal husbandry professor and head of the animal production department at the Polytechnical University of Madrid. "What's happening now is that it costs 350 to 400 euros ($455 to $520) a month to maintain a horse and there's a lot of people who can't" afford that anymore.

Spain is in "crisis for everything that is luxury, and horses are a luxury," Buxade added.

The Agriculture Ministry horse census counted 660,889 horses in Spain this year, down from a high of 748,622 in 2011 — but the number is still much higher than the 435,598 counted in 2007 just before Spain's economic boom imploded. Veterinarians and horse experts warn that the high number of horses being killed in Spain could continue for years. Government officials have taken notice but there doesn't seem to be any solution to prevent the slaughters.

It all boils down to simple economics: Horses have useful lives of 10 to 12 years, and many of those alive now were born just a few years ago for a market that has disappeared. Many breeders have gone out of business and those that remain are breeding fewer horses, said Leopoldo Fernandez, president of the Spain-based Union of Breeders of Spanish Horses association.

"The inventory is being diminished and breeders are being diminished," said Fernandez, who founded Spain's huge Telepizza restaurant chain and runs a large Pura Raza Espanola breeding operation in Segovia, about an hour from Madrid. "You have the breeder who throws in the towel, and the breeder diminishing the amount he is breeding. Horses are either being sold at a very low price or going to the butcher. We don't know how many people are digging holes in the ground and putting their horses there."

Fernandez said he's seen evidence of some Spanish breeders underfeeding their horses amid their struggle to make ends meet. And animal rights activists say the crisis has sparked an increase in the number of abandoned horses despite the threat of fines.

But Buxade said the slaughterhouse is still the more common fate. The reason: Most Spanish horse owners complied with a government mandate requiring microchips that include ownership details to be surgically implanted into horses. That means owners who abandon their horses can be tracked down and assessed penalties ranging from hundreds to thousands of euros.

Breeder Francisco Jose Rodriguez has given away two of his Spanish purebred horses to friends in recent months and has no plans for breeding the mare that just a few years ago produced offspring he could sell for between 4,000 euros and 12,000 euros each. Letting her give birth to more foals now would just add to his horse feeding and veterinary costs.

The breeding business Rodriguez started on the side in Almonte from his fruit growing operation has turned "into a hobby, a pastime."

"If you can't eat because you don't have any money, the horse is going to get a lot less," Rodriguez said. "I want to avoid sending my horses to the slaughterhouse, but if my work dries up, I'll have to do it. It was a business before, now it's destruction."

A few kilometers (miles) away at his ranch, Mesa is trying to unload a stallion that would have fetched 20,000 or 30,000 euros a few years ago for 4,000 euros. He's ready to give that horse and the rest of his away if he can't sell them by the end of June.

He's set that deadline because it coincides with the annual pilgrimage of Catholic faithful to a nearby hermitage to see the small carved statue of the Virgin of El Rocio. The event frequently draws a million people, many on horseback or in horse-drawn carriages, in keeping with tradition.

Mesa said he'll use the event to advertise his horses for one last time to a crowd that appreciates them — and might want to spare his from being slaughtered.

"I'm a horse lover, and I'm doing everything I can to save their lives," he said.