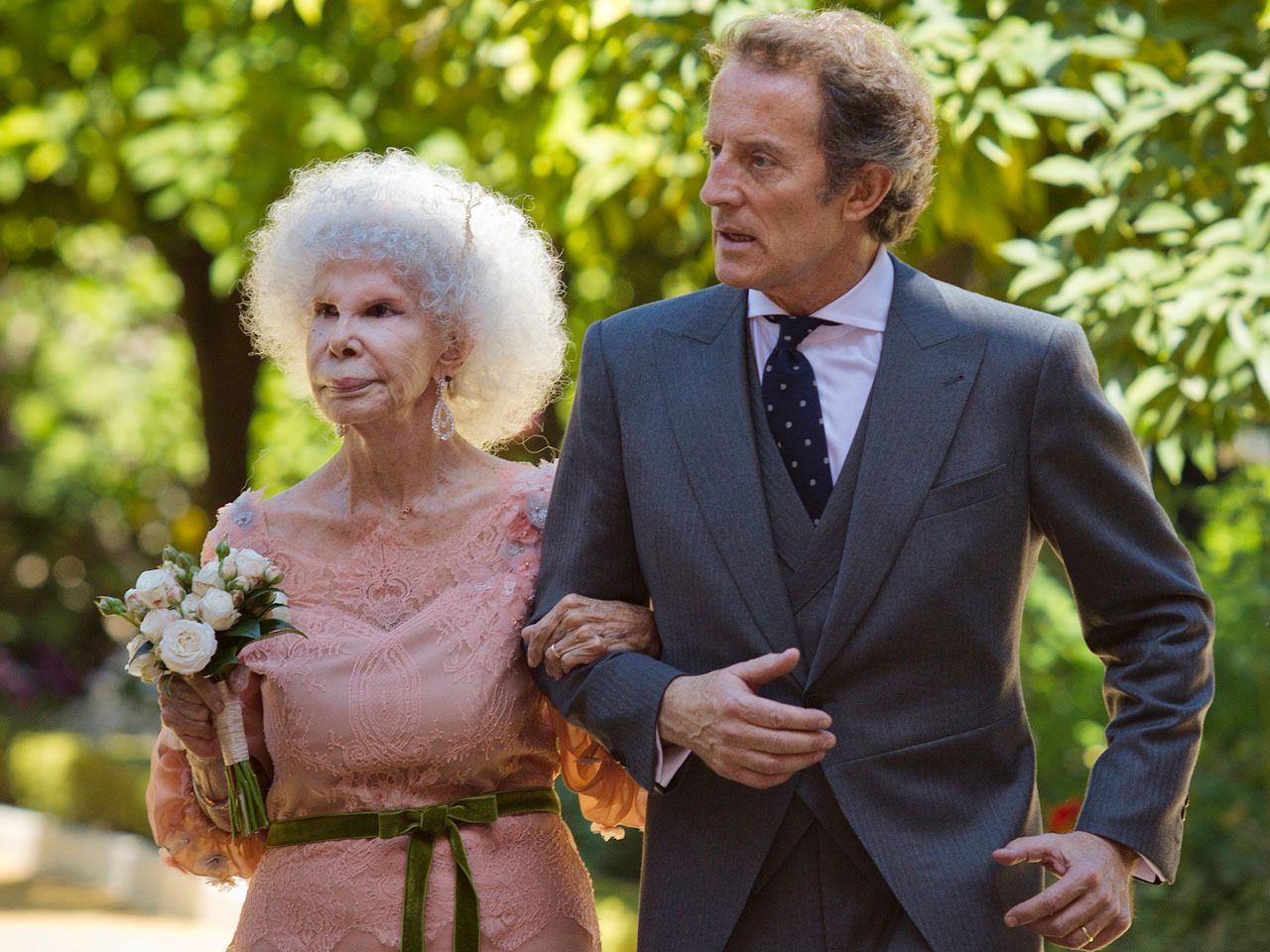 (CBS/AP) SEVILLE, Spain - The Duchess of Alba, an 85-year-old Spanish aristocrat considered the world's most title-laden noble, married a civil servant 25 years her junior on Wednesday, shrugging off her children's qualms and celebrating by kicking off her shoes and dancing flamenco.

A crowd of several hundred clapped and roared its approval as she waved, smiled and danced on a red carpet after her wedding to Alfonso Diez at Palacio de las Duenas, her 15th-century residence in the cobblestoned old quarter of Seville.

Diez stood close by in a dark suit, smiling and holding an outstretched arm at the ready, as if to catch his bride if she stumbled. The duchess hiked up her dress as she performed a few whirling steps of Spain's quintessential art form in the city perhaps best known for it.

With her frizzy white hair, squeaky voice and wildly colorful clothes, the duchess is among Spain's most famous people. Only a few dozen family members and close friends were invited to the ceremony.

She and Diez, a social security administration employee, are old acquaintances through her second husband, who was a former Jesuit priest, and Diez's brother, an antiques dealer. They bumped into each other about three years ago outside a movie theater in Madrid and eventually started dating.

Her six children, all from her first marriage, reportedly balked when the idea of marriage emerged. In July of this year the duchess assigned them and her grandchildren juicy chunks of her vast estate, including mansions and palaces, in an effort to appease them and clear her way to the altar.

"I have been alone in this project, and got nothing but negative opinions until they realized what kind of man he is," the duchess told the Spanish news agency Efe this week in a rare interview.

Estimates of her wealth range from $800 million to $4.7 billion. Besides fabulous and historic real estate sprinkled around Spain, the family treasure boasts paintings by Goya and Velazquez, a first-edition copy of Cervantes Don Quixote, and letters written by Christopher Columbus.

However, although owned by the 500-year-old House of Alba, the artwork and some other property is classified as part of Spain's national heritage and cannot be sold without government permission.

Diez will be entering a new world, although he has reportedly signed a document renouncing any claim to the House of Alba wealth.

As a civil servant in Madrid he earned $2,000 a month. Now he will live in splendor as a duke, reportedly with plans to take a leave of absence from his day job, although the noble title will pass on to the duchess's eldest son, Carlos, when she dies.

Two of the children did not attend the wedding. Her only daughter, Eugenia, was reported to be hospitalized in Madrid with chicken pox, while one of her sons, named Jacobo and reportedly unhappy with his slice of the family fortune - was said to be traveling outside Spain.

The matriarch's supreme title is Duchess of Alba, but she has more than 40 others - in fact, more than anyone else in the world, according to Guinness World Records.